Pakistan's 1-0 victory in the historic home-series against Sri Lanka may well have given some breathing room to Azhar Ali and provided relief to a nation grown accustomed to disappointments in Tests in the recent past. 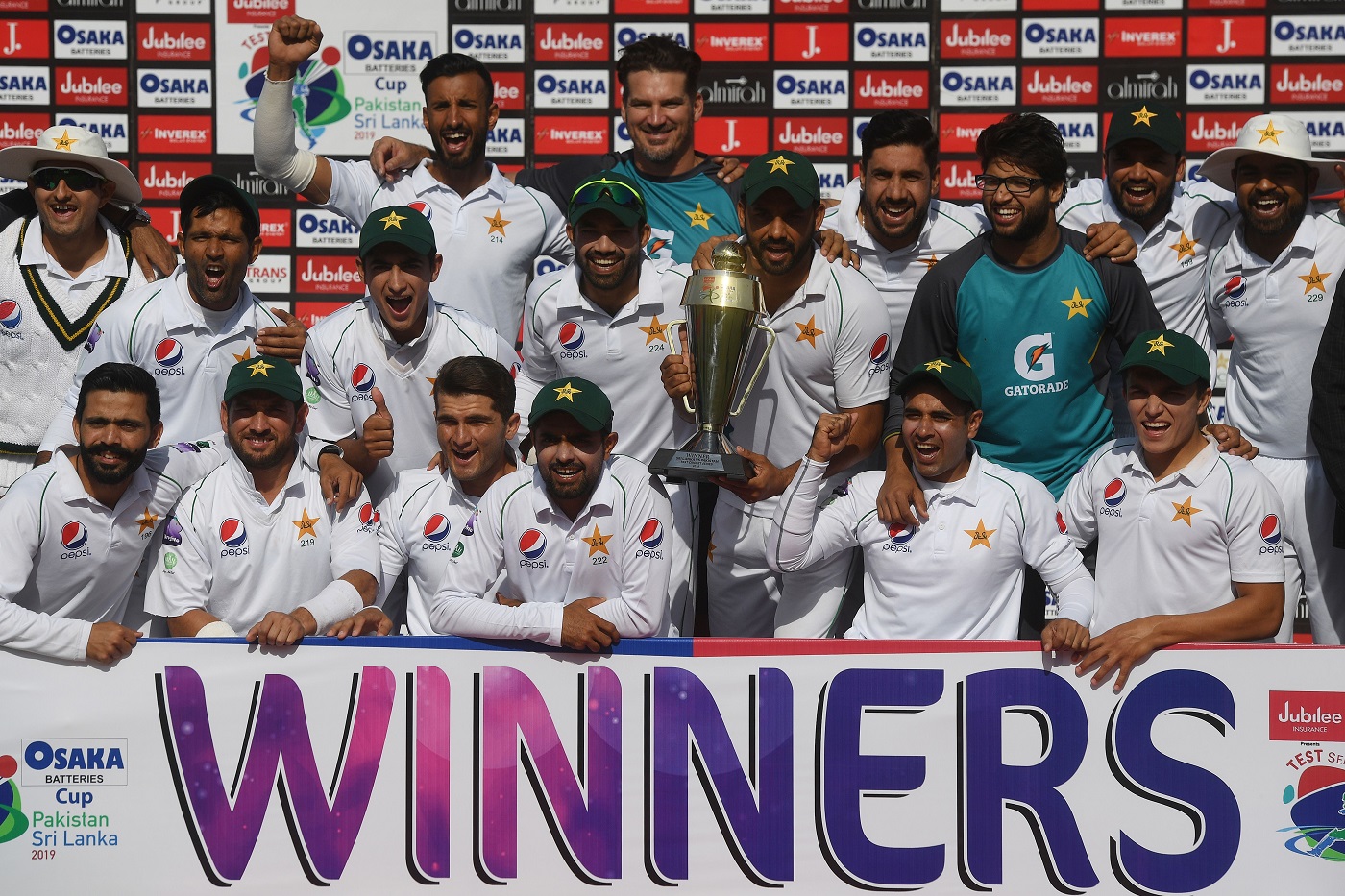 It was the 19th of October 2018 in the UAE when Pakistan last tasted victory in a Test series. Since that day, Pakistan had changed their captain, coach, selection panel and domestic structure. Things were looking decidedly bad for the Test side as they headed into this homecoming series against Sri Lanka, with the unwelcome weight of 7 losses in their previous 8 Tests which included an abject display in Australia. The discontent was mounting in the media and amongst fans and the forecast appeared bleak for a side that had slipped to 8th in the ICC Test rankings.

Apart from the danger of further humiliation, this series against Sri Lanka had more than just World Test Championship points riding on the outcome. The future of the new setup with Misbah-ul-Haq was also at stake. Thankfully the worst fears of many were not realized and Pakistan’s Test series win by a 1-0 margin has bought relief to the nation and for Misbah as well as captain Azhar Ali, much needed breathing space as defeat against Sri Lanka in the first home Test series in a decade would have been catastrophic.

On the positive side of things, what Pakistan have produced with their backs to the wall is a new star in the shape of Abid Ali. The 32-year-old opener makes for an unlikely hero but Abid has taken to international cricket like a duck to water, producing a rare feat of debut hundreds in Test and ODI cricket, and two hundreds in his first two Tests. Apart from a brief period of edginess against the short ball, Abid looked assured at the crease and demonstrated free-flowing stroke-play not seen by Pakistani openers since the days of Saeed Anwar. His outpouring of joy upon reaching his milestones was no doubt partly driven by a sense of vindication after years of toil in domestic cricket. Since the start of the 2015 Quaid-e-Azam Trophy, Abid Ali averages 45.70 in 4-day cricket which is especially impressive for an opener given much of first-class cricket was played in seam-friendly conditions against the Dukes ball. Abid furthered his case with outstanding performances for Pakistan A last winter. His 2nd innings effort in the 2nd Test in Karachi, saw Abid cash-in on an erratic Sri Lankan bowling attack where on a flattening surface he produced a massive hundred to put the game beyond Sri Lanka after Pakistan conceded a 1st innings deficit.

His partner Shan Masood also had a point to prove, too. Having been recalled versus South Africa last winter and proving to be the most assured Pakistani batsmen against the short ball, Masood had done little since to quash concerns about whether he can hold a down a Test place after years of being in and out of the side. After a failure in the 1st Test in Rawalpindi and in the 1st innings in Karachi, he too produced an important hundred in a mammoth 278 opening stand with Abid.

No reminder is needed about Babar Azam’s class. Rarely has a Pakistani batsman made the sublime look so effortless. This time last year one wondered whether Babar could establish himself as one of Pakistan’s leading Test batsman. Fast-forward to end of 2019 and now a more relevant question is where Babar ranks amongst the world’s elite batsmen.

Whilst Abid, and Babar have given cause for joy to Pakistan fans, grave doubts remain about three of Pakistan’s senior Test players Azhar Ali, Asad Shafiq and Yasir Shah. It was suggested after the debacle in Australia that this trio needed to be held accountable and should have lost their places in the team. This series has done little to assuage those doubts. Azhar looked wretchedly out of form until his final innings where he produced his first hundred in 12 months. More worrying is Azhar’s awful captaincy. Pakistan should not have conceded a 1st innings lead of 80, nor allowed Sri Lanka to take the Test into a 5th Day – but Azhar’s baffling insistence on setting a defensive field of just two slips and a deep point for his in-form pacers allowed the tourists off the hook. Asad Shafiq produced a valuable fifty in the 1st innings in Karachi but gave his wicket away softly, whilst Yasir Shah continues to regress alarmingly, proving to be expensive even in Asian conditions. Yasir’s control and accuracy enabled him to succeed Saeed Ajmal as Pakistan’s primary Test spinner in 2014 and became the quickest Pakistani bowler to 50 Test wickets. However, that control has been totally missing recently with at least one bad ball per over. Having been dropped for the Rawalpindi Test, Yasir returned to the XI in Karachi where spin was thought to play more of a role but it was part-time Haris Sohail who looked more threatening, and took the vital wicket of a well set Dinesh Chandimal in the 1st innings. The big test of any coach or selector is their willingness to drop unproductive senior players. One of former skipper Imran Khan’s first decisions was to axe Majid Khan, his own cousin and childhood hero, when the latter was past his best. Misbah-ul-Haq needs to make similar tough calls with this experienced trio who are already past the age of 30.

After an abysmal series in Australia where taking 10 wickets looked a struggle let alone 20, Pakistan’s bowlers finally stepped up in the Sri Lanka series. The pace trio of Mohammad Abbas, Shaheen Afridi and Naseem Shah complemented each other well. After an uncertain recovery from a shoulder injury, Abbas in Karachi bowled with the accuracy, displaying the same ability to extract sideways movement and guile, despite a lack of pace, that propelled him into the top three of the ICC Test bowling rankings last year. Left arm pacer Shaheen Shah Afridi, who was by far Pakistan’s best bowler in Australia, has in recent times appeared to develop an inswinger to right-handed batsmen which really is a necessity for any left arm quick. If Shaheen stays fit and gains more Test experience, Pakistan have a potentially world class bowler on their hands. Naseem Shah is the quickest of the trio, and his control over length is impressive for such a young bowler. This is also the quality which saw him become the youngest fast-bowler to register a five-wicket haul in Test cricket. However, Pakistan must manage his workload sensibly and Azhar must set more attacking fields as time and again Naseem found the outside edge only for the ball to travel past a vacant third slip.

The biggest positive, of course, was the return of Test cricket on Pakistan soil for which Sri Lanka deserve enormous credit for taking a momentous step, when arguably they of all teams have the most understandable grounds for refusing to tour given tragic events of March 2009. The opening Test in Rawalpindi may well have been a damp squib, yet thousands turned out for the final day when Abid Ali and Babar Azam put on an exhibition of wonderful stroke-play. In Karachi, crowds revelled in seeing their heroes in action with Babar Azam appearing already on his way to super-stardom. The often-criticised PCB deserve much credit for their efforts in the last few years in convincing foreign visitors and one hopes we don’t have to wait long before the next home Test series. For all their flaws and maddening inconsistency, Pakistan deserve to be playing in front of packed stands in a place, unlike the UAE, they can actually call home.