Predict the outcome of the England vs Pakistan Test series

Thanks to Markhor for this review of the tournament! 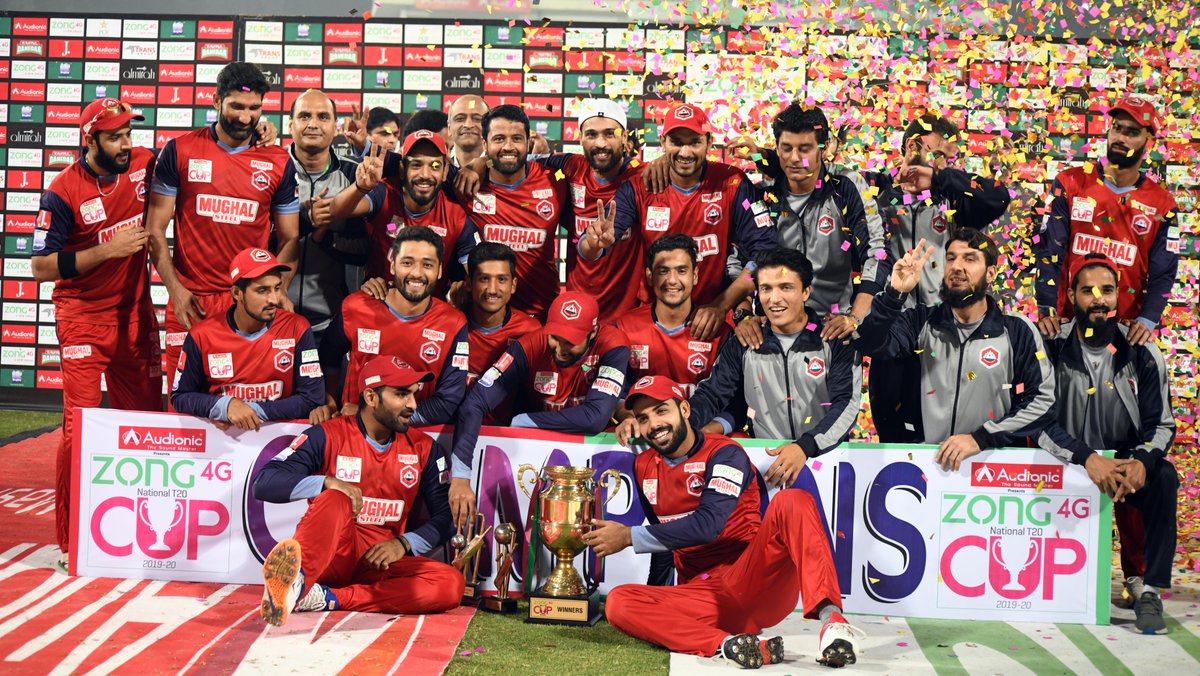 After a dismal 3-0 whitewash at the hands of an unfancied Sri Lanka team in home conditions, the revamped National T20 Cup featuring six regional teams took on added importance for Pakistan’s national selectors. At the forefront of their minds will have been identifying new, young batsmen to prop up a Pakistan batting unit that proved to be flimsy under pressure against the Sri Lankans.

However the tournament’s leading batsmen were familiar tried and tested faces of the past. Awais Zia, who has never look convincing at international level, took the honours as the most prolific batsman. Big hitting Asif Ali motored along at a Strike Rate of nearly 200 yet has been unable to translate his domestic success at the international arena. Babar Azam once again emphasised his class but already much burden is being placed on his young shoulders. It remains a worrying long-term trend that whilst Pakistan seemingly churns out a never-ending supply of exciting young bowlers, batting remains the national Achilles heel and the National T20 did nothing to assuage those concerns.

The batting surprise of the tournament actually came in the form of Southern Punjab’s veteran fast bowler Wahab Riaz. Promoted as a pinch hitter, Wahab’s SR of 166 was one of the highest in the tournament with his most impactful knock coming in a group game against Khyber Pakhtunkhwa. In trouble at 106-6 in a chase of 155, Wahab slashed and attacked his way to an unbeaten 42 of a mere 17 balls.

Naturally, it was a different story with the bowlers. The evergreen Sohail Tanvir was the tournament’s leading wicket-taker, but the pacer who caught the eye was Balochistan’s left-arm seamer Akif Javed. Compared to Indian seamer Zaheer Khan, young Akif was impressive in his control over line and length and got the new ball to move both ways. His best performance came against Southern Punjab taking 3-16, removing experienced internationals Shan Masood and Mohammad Hafeez for ducks. If the left-armer can continue to develop a potent inswinger to right-handed batsmen, and work on the variations that are vital in white ball cricket, he will earn a callup to the national team. Akif is over 6 foot tall and there’s no reason why he cannot gain more pace as his body develops and gets as much out of his action as possible.

A cause for concern for Pakistan has been Shadab Khan’s form, so coach Misbah-ul-Haq will be encouraged to see him emerge as the tournament’s leading wicket-taker on the spinners side. More importantly, Misbah has identified a need to develop Pakistan’s wrist spin depth therefore it was heartening to see leg spinners Zahid Mahmood and Mohammad Mohsin ending up in the tournament’s top ten leading wicket-takers. What was disappointing however was to see Central Punjab’s use of Zafar Gohar, arguably the most promising young spinner in the country. After a horrid outing vs Central Punjab in his opening match, he played once more before being dumped. How is this a proper way to develop young talent?

On a more positive note, the National T20 gave an opportunity for the weaker regional sides to turn their season around. Balochistan and Northern are the bottom ranked sides in the ongoing 4 Day Quaid-e-Azam Trophy, but found their footing in the T20 format and progressed to the final at the expense of more fancied sides like Central Punjab and Sindh. Northern possessed an array of allrounders such as Sohail Tanvir, Shadab Khan, Imad Wasim and Mohammed Nawaz who are far more comfortable in white ball than red ball cricket. Umar Amin was able to provide steady starts while Asif Ali added power in the middle-order. Northern also possessed a variety of bowling choices with the raw pace of Haris Rauf and Mohammed Musa, a canny and experienced seamer in Mohammed Amir, and spin options in Imad, Shadab and Nawaz who can not only take wickets but dry the run rate – as evident by their performance in the final against Balochistan.

Balochistan should not be disheartened by its final defeat. In Akif Javed they unearthed the find of the tournament, who should be fast-tracked into the red ball squad. Amad Butt demonstrated why he ought to be in the reckoning for the national team by ending up as the team’s leading wicket-taker, whilst seasoned campaigner Yasir Shah chipped in with important wickets. However their batting proved ultimately too weak and the poor form of Haris Sohail, easily their most accomplished batsman, proved costly.

Khyber Pakhtunkhwa will be extremely disappointed to have failed to qualify for the final after an unbelievable implosion in the semi-final vs Northern chasing a modest total. Despite early wickets, Khyber seemed to have the chase under control with Iftikhar Ahmed, recently recalled to Pakistan colours, scoring fifty. However, they lost their last 5 wickets for just 12 runs in the space of 2 overs, showing a lack of composure that sadly is emblematic of Pakistan’s chasing woes. Possessing a varied pace attack, a hard hitter in Khushdil Shah, and experienced batsmen such as Mohammad Rizwan and Iftikhar Ahmed, they were one of the favourites and were left licking their wounds.

Sindh started their campaign strongly by winning two of their first three matches but fell away. Their spinners Kashif Bhatti and Mirza Jamil were easily negated, whilst the batsmen failed to impress with no batsman scoring at a SR higher than 160 and produced only two fifties collectively. They lacked the big boundary hitters of other sides, and captain Asad Shafiq looked a misfit in the T20 format. Mohammad Hasnain however continued to impress with his raw pace and has already developed an effective yorker.

Little went right for Quaid-e-Azam Trophy table toppers Central Punjab, who finished bottom under the captaincy of Babar Azam and lost three of four completed games. Bowling was their biggest problem having failed to restrict their opponents under 150 in any of their encounters. None of their bowlers finished with an economy rate of less than 7, and whilst their leading wicket-taker Faheem Ashraf took 10 scalps – it came at over 10 runs per over. It was baffling why promising young seamer Ahmed Bashir, who was one of the leading pacers of the 2018 National T20, was benched whilst Waqas Maqsood proved a totally ineffective spearhead!

Finally, whilst PCB deserves to be greatly commended for regionalising domestic cricket, the quality of PTV’s broadcasting remains woefully outdated and fails to present Pakistan cricket in the best possible light. Of course the state broadcaster does not possess the resources of a private entity such as Sky, but 1980s-style picture quality in a world of HD and 3D, hardly entices youngsters to be glued to the screens to watch the sport.