15 Years On: The Story of Pakistan's unlikely 2005 triumph in India

An absolutely riveting read by one of our most distinguished members, Markhor! and one that is sure to bring out emotions from all Pakistani fans! 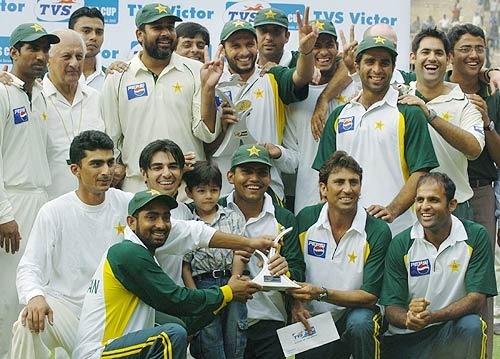 It’s difficult to imagine a Pakistan team combining raw talent and flair, with grit and fighting qualities under pressure, led by a captain in full command of his dressing room post-Imran Khan. Yet 15 years ago under the unlikely duo of skipper Inzamam-ul-Haq and coach The Late Bob Woolmer, Pakistan toured India for the first time since 1999 and secured one of their greatest triumphs.

After the disbanding of the “Mighty Nineties” side that had entertained fans all over the world throughout the previous decade, and the debacle of the 2003 World Cup, Pakistan entered a purgatory phase. Household names such as Saeed Anwar, Wasim Akram and Waqar Younis exited the stage, and in September 2003, one of the last remaining members of the 1990s team in Inzamam-ul-Haq was appointed captain. Results were rocky in Inzamam’s first year of captaincy, with Test victories over South Africa and New Zealand mixed in with a home defeat to India and a whitewash in Australia leaving Inzamam’s captaincy hanging by a thread by the time of the return series in India in the spring of 2005.

2005 saw the flourishing of the bilateral political relationship between Pakistan and India, sadly unimaginable today. The 1999 Kargil episode, and the 2001 attack on the Indian Parliament led the two nuclear armed countries to the brink of conflict. However Indian Prime Minister Atul Bihari Vajpayee announced in May 2003 he was making one final attempt to make peace with Pakistan, and restored diplomatic ties with its neighbour. Despite Vajpayee’s defeat in the 2004 elections, his successor Manmohan Singh continued dialogue with Pakistan President Pervez Musharraf. The famous 2004 “Jeet Lo Dil” series was conducted in an atmosphere of harmony and led to one of the greatest one day series in living memory. The return leg in India was highly anticipated.

Pakistan’s buildup to the series was typically chaotic. Star pacer Shoaib Akhtar was sidelined with injury, leaving the tourists with a seam bowling contingent of Mohammed Sami, Rana Naved, Abdul Razzaq and Mohammed Khalil. The media derided them as the “worst Pakistan bowling attack” in history, with former captain Mushtaq Mohammed labelling the squad as “little better than a club side”. On paper, this attack had no right to compete against India’s batting powerhouses Sachin Tendulkar, Rahul Dravid, Virender Sehwag and VVS Laxman.

The First Test in Mohali confirmed these fears. After Pakistan stumbled to 312 on a belter, India proceeded to take Pakistan’s inexperienced bowling attack apart led by opener Virender Sehwag. Sehwag possessed exceptional hand eye coordination and brutalised Pakistan the previous year, most notably with a triple century in Multan. Many Pakistan fans from this era will tell you while they respected Tendulkar, Dravid and Laxman – Sehwag caused most nightmares. Sehwag could make a mockery of whatever plans or field settings were in place. Scoring 173 at a strike rate of 70, Sehwag put India in prime position to strike first blood. By stumps on Day 4, Pakistan were 53 behind and already 6 wickets down in their 2nd innings.
The fifth day however saw an unexpected twist.

For years Pakistan often lacked the stomach for a fight - the grit to grind out a draw. Yet young wicketkeeper Kamran Akmal and Abdul Razzaq, eschewing his typically aggressive method of batsmanship, defied India for 56 overs. What a time for Kamran to produce his first Test hundred, and a draw demonstrated Bob Woolmer’s side had greater resilience than its more talented predecessors.

The smiles soon wore off. Having failed to put away the tourists in Mohali, India found its killer instinct in Kolkata. Rahul Dravid amassed a mammoth 270 in the deciding Test in Rawalpindi the previous year, and produced twin centuries in the 2nd Test with Pakistan having no answer to The Wall’s impeccable technique. However, the Kolkata Test was the turning point for one man.

Younis Khan’s international career up until that Test is best described as underwhelming. The team manager reportedly told him after twin failures in Mohali he was “finished”, and few tears would’ve been shed amongst Pakistan fans had that been Younis’s last Test. However, Younis produced a stunning career turnaround. A hundred in the 1st innings prompted a defiant celebration, and paved the road for Younis Khan to become Pakistan’s most prolific Test batsman. Nevertheless, India proved too strong and familiar foe Anil Kumble prevented another fifth day rearguard.

The Bangalore Test was Inzamam’s 100th and scene of Pakistan’s famous 1987 series win under Imran Khan. It would take an effort of epic proportions to level the series, and Pakistan produced just that. But first, Pakistan needed an answer to Anil Kumble. Kumble famously took a ten-fer in Delhi in 1999 and appeared to have the psychological edge over Pakistan’s batsmen.

Younis Khan and Inzamam-ul-Haq however proceeded to dominate one of the great legspinners in an exhibition of how to play spin bowling. Neither allowed Kumble to settle, using their feet superbly and swept him to distraction. Kumble emerged with 0-159 from 46 overs, his worst performance hitherto in a Test innings. There have been many outstanding Younis Khan innings, but none tops his 267 in the searing Bangalore heat.

As the first two Tests demonstrated, 1st innings totals of 300-400 are merely par on good Indian batting tracks, but with 570 on the board Pakistan were in a commanding position. Once again though Sehwag proved a thorn in the visitor’s side, slamming 201 from just 262 balls. However Pakistan’s own legspinner Danish Kaneria worked his way through India’s star studded lineup to a 5-fer, securing Pakistan a healthy lead. India, led by under pressure captain Sourav Ganguly who was experiencing a rut in form, collapsed on the fifth afternoon and Pakistan famously triumphed after Shahid Afridi scythed through the middle order. Never in Pakistan’s history has a 1-1 draw been celebrated with such vigor, but the unlikely underdogs proved more than a match for India’s heavyweights.

The one day series began according to script. Virender Sehwag continued to bulldoze Pakistan’s attack, while MS Dhoni’s maiden international hundred in Visakhapatnam meant at 2-0 down in a 6 match series, Inzamam’s boys looked set for a torturous series. Yet Pakistan produced another astonishing comeback with their backs to the wall. Having crumbled while chasing in the first two ODIs, Pakistan thanks to youngsters Salman Butt and Shoaib Malik reversed the scoreboard pressure on India in Jamshedpur.

Cue an unlikely hero – Rana Naved-ul-Hasan. For Pakistan fans brought up on tales of Wasim Akram and Waqar Younis, Rana Naved’s ungainly manner and lack of express pace prompted comments of “Rana Who?” But his ability to obtain some seam movement in batting conditions, clever changes of pace, and variations led to a career best 6-27. In a chase of 320, India slid to to 82-6 and were decimated. Next in Ahmedabad, scene of religious riots three years ago, Pakistan entered the lion’s den. In front of a partisan crowd, Sachin Tendulkar’s 123 set Pakistan a demanding chase, and chasing has never been Pakistan’s strength. Once again, Pakistan dug deep and produced a masterclass in running ones and twos in the middle overs in sweltering heat. In the final over, it was a battle of two icons – Inzamam-ul-Haq versus Sachin Tendulkar, and Inzamam prevailed with a nerveless dab behind point to level the series.

Next is what’s fondly nicknamed as the “Kanpur Massacre”. The only way to do justice to this event is to search it on YouTube and relieve arguably Shahid Afridi’s most famous innings besides his debut hundred in Nairobi. Afridi was another mercurial talent The Late Bob Woolmer breathed life into, with 2005 proving an excellent year for the all-rounder.

Delhi was a fitting scene for one last drubbing by Pakistan. India by now had wilted, Sehwag had been quietened by Rana Naved and the bowlers were ragged from Pakistan’s clinical batting. Ganguly, a national hero a year earlier, was now being openly jeered by fans out in the middle and during post-match interviews. After another Afridi blitz, and solid middle order contributions from Shoaib Malik, Mohammad Yousuf, Inzamam-ul-Haq and Younis Khan, India needed 304 to square the series. They came nowhere close, losing 5-30 in a middle phase where Pakistan, unthinkably, toyed with their superior opponents. As a young fan, this was the icing on the cake as Pakistan produced a near perfect ODI performance.

To put in perspective the significance of this result – India never lost a bilateral ODI series at home in the 1990s. They would lose only 2 of the next 15 home ODI series. This was the zenith of the Inzamam-Woolmer era, where Pakistan with an unproven, inexperienced team belittled by the pundits proved more than the sum of their parts demonstrating a resilience and never say die attitude in their archrivals’ territory. 15 years on, and this series still never fails to put a grin on the faces of Pakistan fans.