@Markhor examines what went wrong with Pakistan’s planning, and execution of those plans during the recently concluded Test series against England. 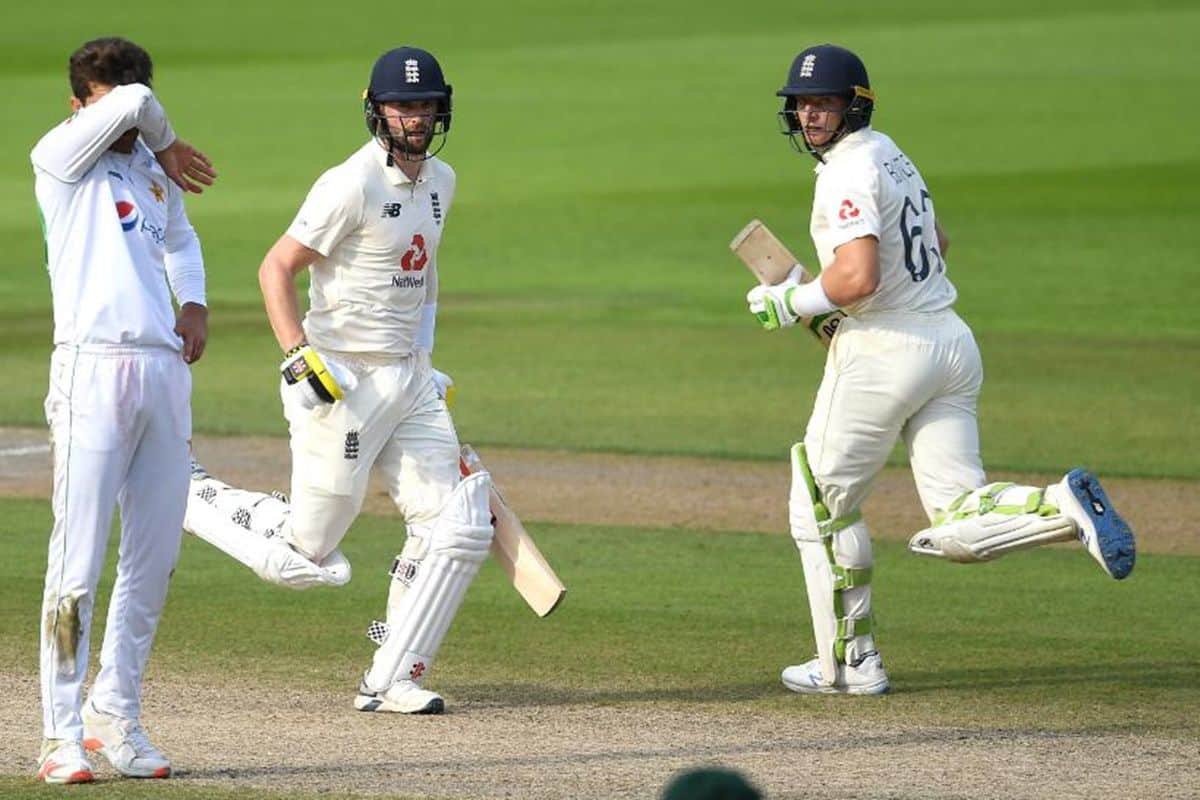 England were 117-5. Ollie Pope helplessly edged a ball rearing up from a length to gully. Jos Buttler, who’s never looked at ease in Test cricket, and Chris Woakes, only reaching double figures twice in his previous ten innings, were the last recognised pair before the tail. This was Pakistan’s moment having bossed the first two and a half days, and despite a collapse on the third afternoon, looked certain to beat England who produced an error strewn performance thus far. Somehow, Pakistan construed to let the game slip through their fingers allowing England to pull off their second highest chase in Manchester. With rain denying any hope of a result in the remaining Tests in Southampton – Manchester was where the series was won and lost.

The captain in cricket, unlike most other sports where the role is little more than a figurehead, is the ultimate decision maker on the field. Former England skipper Nasser Hussain described a “gut feel” for the game being essential for the role. Yet Azhar Ali’s previous stint as ODI captain demonstrated few signs of it when his team descended to 9th in the rankings. Nevertheless, the PCB appointed him as Test captain last October. His tenure began with a disastrous whitewash in Australia. Home wins against Sri Lanka and Bangladesh bought temporary relief, but criticism has come thundering after Manchester’s meltdown.

Fans were left scratching their head as to why Chris Woakes, repeatedly dismissed by short balls last year in the Caribbean and during the Ashes, was not targeted with the same ploy. Naseem Shah, the quickest of Pakistan’s pace trio, was not utilised around the wicket with a short leg and a leg slip or gully. Instead Pakistan continued feeding Woakes’s strength delivering length balls outside off. Buttler’s counterattack meanwhile meant Azhar quickly retreated onto the defensive. The winning runs came with a thick outside edge past the vacant third slip – indicative of Azhar’s captaincy. Why not deploy a third slip when your side desperately needs wickets? What was the use of conserving runs by that stage? Furthermore, despite much talk of Shadab Khan providing a fifth bowling option – he bowled a grand total of 11.3 overs in the Test.

Some argue Pakistan lost that Test in their 2nd innings. 107 ahead, Pakistan needed to bat sensibly on a wearing, up and down pitch yet inexcusably collapsed for 169 - the biggest culprits being their senior batsmen. Azhar Ali had averaged 12 outside Asia in the previous three years leading into the tour. His technical weakness of playing around his front pad with his head falling over to the offside meant a susceptibility to LBW. Azhar was dismissed twice this way in Manchester. Meanwhile Shafiq, having played more consecutive Tests than the likes of Viv Richards, Brian Lara and Javed Miandad, went missing under pressure yet again. In the 1st innings, he tamely edged to slip defending with an angled bat. In the 2nd innings, he was run out just when his partnership with Mohammad Rizwan was threatening to take the game away from England.

There is no explanation why Asad Shafiq, despite averaging 27 outside Asia since the retirement of Misbah-ul-Haq and Younis Khan with not a single hundred, remains un-droppable. It’s impossible to imagine any of the top ranked sides tolerating such mediocrity, such lack of responsibility from a senior player, for so long especially when there have been other middle-order batsmen racking up the runs in domestic cricket. One wonders how selection decisions are made in Pakistan, and whether performance even factors into the criteria, or whether the buzzword of “experience” forgives any amount of underperformance.

Azhar in all fairness produced a gem of an innings in Southampton. Having conceded 583, all eyes were on the skipper. On a flat deck where young Zak Crawley produced a staggering 267, there could be no excuses. Azhar looked far more balanced at the crease and produced glowing praise from the great Brian Lara. However, by then it was too late for Pakistan. With no hope of enough time in the game for a result due to torrential rain, it was a hundred delivered under no pressure, and a knock Pakistan needed three weeks earlier. Despite Babar Azam’s stellar run of form in international cricket, he too had an underwhelming series. Babar batted gloriously to reach 69 in the 1st innings in Manchester, but gave his wicket away driving outside offstump in the very first over of the second day. Pakistan could’ve scored a total well in excess of 329 had Babar kept his concentration, especially with Shan Masood batting superbly at the other end. Babar never reached the heights of that first knock in the remainder of the series, albeit in difficult conditions with rain continually disrupting proceedings.

There were positives in Pakistan’s batting however. Mohammad Rizwan produced a pair of gutsy and pugnacious fifties in the Southampton Tests. Rizwan was exceptional with the gloves in a country where keeping is never easy with the movement of the Dukes ball that can wobble even after passing the batsmen which infamously tormented Kamran Akmal in 2006. Shan Masood never replicated his heroics in the 1st innings in Manchester where he produced the highest knock by a Pakistani Test opener in England since Saeed Anwar in 1996. His nemesis, James Anderson, troubled him once again. However, Shan’s record in tough away trips since his recall in 2018, averaging 37 from tours of South Africa, Australia and England, has merited a further run at the top of the order. Abid Ali was one of the guilty men in Pakistan’s 2nd innings collapse, top-edging a slop sweep to the man in the deep positioned for the shot, but didn’t disgrace himself with a fortuitous fifty in the 2nd Test followed by a gritty 42 from 162 balls when Pakistan were following on in the 3rd Test.

Only in Pakistan could there be calls for a Test opener who averages 57 be axed after a few failures in their first away tour. It’s even more baffling given the alternatives – Imam-ul-Haq averages 25 even including four Tests in the UAE, and Sami Aslam averaged 23 in his last series in the UAE. The Shan-Abid combination should continue for now.

The bowling underwhelmed despite the pre-series hype. Mohammad Abbas was his usual metronomic self, bowling the ball of the summer to Ben Stokes as England slid in Manchester in their 1st innings, but didn’t have the pace to trouble batsmen when conditions eased. Yasir Shah looked far more assured with mentor Mushtaq Ahmed returning to backroom duties, and bowled his heart out in Manchester, but retains the tendency to concede a bad ball per over particularly at the start of a spell. The biggest disappointments were the two youngsters Shaheen Afridi and Naseem Shah who averaged 51 and 69 with the ball respectively.

Let this criticism be prefaced by saying both have potential to become outstanding fast bowlers. However, Pakistan’s camp allowed expectations to soar to totally unreasonable heights before the series. Coach Misbah-ul-Haq spoke in a press conference of how Naseem could “win a match single-handedly” – Naseem only made his First-class debut two years ago while Shaheen debuted in First-class cricket three years ago. Both are works in progress yet Pakistan depended on the duo to win an away series in England on their first attempt. Shaheen lately has developed an inswinger to right-handed batsmen, essential for any left-arm seamer. However, it’s not uncommon for youngsters learning new skills to “lose” another – in this case being Shaheen’s outswinger which was deployed to good effect at the 2019 World Cup. Nor was his inswinger accurate enough, often straying down legside. Shaheen also was down in pace – it can take time for a pacer of Shaheen’s height to get their knees pumping again after a long layoff. Naseem meanwhile bowled the occasional magic delivery but lacked control. His outswinger was generally easy for batsmen to leave. Again Azhar’s captaincy was lacking – too often being distant when the youngsters needed guidance. Wasim Akram and Waqar Younis had the luxury of having Imran Khan standing at mid-off or mid-on when they were young - Shaheen and Naseem did not have that option.

Playing two seamers aged 20 and below is rare in Test cricket for a reason as such cricketers are still a work in progress at that age. Pakistan must stop these fantastical notions of teenagers with little First-Class exposure taking the world by storm. Not everyone is a Wasim Akram. Pakistan needed another more seasoned pacer to shoulder some of the burden placed on Shaheen and Naseem. Yet Misbah’s alternatives were 36 year old Sohail Khan, not fit enough to play in a four man attack, and 33 year old Imran Khan, who never looked threatening in Australia, while Usman Khan Shinwari was unimpressive in the practice matches.

Misbah-ul-Haq is approaching the completion of a year into the job, but will find patience wearing thin if he fails to take tough decisions regarding senior batsmen after yet another overseas series loss. Azhar Ali is not a natural captain, and fresh blood at #3 and #5 positions must be identified. The question of a four vs five man attack also dogged yet another tour. Unlike previous coaches, Misbah has selection authority to answer these questions before another overseas Test defeat – he must use it wisely.