"I'm still confident that I can play Test cricket for England" : Adil Rashid

Regarded as an important part of the England line-up in the shorter formats of the game, the 29-year-old Adil Rashid has an impressive tally of 70 ODI and 16 T20I wickets to his name.

In an interview, Adil spoke about his team's disappointment of not winning the Champions Trophy, his desire to establish himself in the England Test team, Moeen Ali's rise as an effective spin weapon for his country, Saqlain Mushtaq's guidance in improving his bowling technique and the positive influence of Sarfaraz Ahmed's presence at Yorkshire this summer. 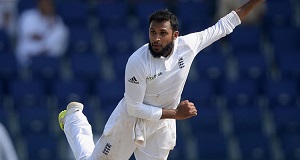 By Saj Sadiq (21st August, 2017)
PakPassion.net: How disappointing was it to not go on and win the Champions Trophy after such a good start to the tournament?
Adil Rashid: Yes, it was disappointing as we played exceptionally well and we had a very good and strong squad with match-winners in every department. Unfortunately, it just wasn't our day in the semi-final but credit to Pakistan who outplayed us and were better than us in every department. There was a lot to learn from that defeat and hopefully in a similar scenario next time around, we can put up a better performance.


PakPassion.net: At the Champions Trophy, you once again showed that you are not a one-trick pony and bowled very well in the batsman-dominated ODI format.

Adil Rashid: Yes, that's something I have been working hard on in white ball cricket, knowing the game plans, knowing how to bowl in various situations and working on setting batsmen up. I've been working on my field-settings in the shorter formats also and it's been going quite well.


PakPassion.net: For a while, many critics saw you just as a bowler who was suited to the longer formats. Is that a tag you wanted to remove?

Adil Rashid: I have never really wanted to be a cricketer who was seen as a one-trick pony. I have always seen myself as a bowler who can perform and do well in any format and in any situation and someone who can take wickets in any type of cricket. I'm not in the England Test squad at the moment so my focus is on white ball cricket and performing in that format and let's see what happens in future.

PakPassion.net: How impressed were you with Moeen Ali during the recently concluded Test series against South Africa?

Adil Rashid: I've been really impressed and I always knew that he had that level of performance in him. He's a match-winner with either the bat or the ball and he's proven that in the past and he's shown that since he came into the England team. He's developed his game a lot since he came into international cricket, he's improved his batting and his bowling and hopefully he can continue doing that.


PakPassion.net: His resurgence as a bowler is potentially bad news for you though?

Adil Rashid: Not really. I'm happy for him as Moeen and myself are very close friends. I'm delighted for him and I hope he can carry that on and put in the performances with both the bat and the ball.


PakPassion.net: Do you think there is room for you and Moeen to play in the same England team?

Adil Rashid: Yes, I think the potential is there. We have done it in the past and there is no doubt in my mind that it can work. There were a few winter series in India, Bangladesh and in UAE against Pakistan and we both played in those series and I hope there will be chances for this to happen in future. Obviously it depends on the conditions and the state of the pitch and who the opposition is and the location. I'm still confident that I can play Test cricket for England and do a good job.


PakPassion.net: What's it been like working with Saqlain Mushtaq and what's his advice been for you?

Adil Rashid: He is very knowledgeable and he knows a lot about the game. He's helped both Moeen and myself tremendously. He's focused with more on the mental side of the game, ball trajectory, the pace I should bowl at in different conditions, ball repetition, working out the opposition batsmen and how important practice is ahead of a match.


PakPassion.net: You are 29 now and at a point where you surely want to be a regular pick in international cricket?

Adil Rashid: Yes, that's true, but over the past two years I've been playing quite a bit of white ball international cricket and I hope to carry that on. I'm fairly confident that I can keep that going but yes, my aim is also to play Test cricket and I've got to make sure that I put in the performances for Yorkshire and hopefully get my chance again in the five-day format.


PakPassion.net: Do you think you are at a key stage of your career?

Adil Rashid: I think every stage of your career is key and you are always learning. You go through various phases in your career, highs and lows and you have to take the rough with the smooth. I don't think any stage in your career can be earmarked as a key stage and you just have to live in the moment, play in the present and not look too far into the future or not look too deeply into the past.


PakPassion.net: What's it been like to have Sarfaraz Ahmed at Yorkshire. Did he remind you about the Champions Trophy semi-final?

Adil Rashid: Yes we've had a few friendly chats and he's reminded me about the Champions Trophy result a couple of times. He's been very good for us and he's got a lot of knowledge about the game and he's been passing that onto all of his team-mates.


PakPassion.net: Does anything faze Joe Root, he just seems to take everything in his stride?

Adil Rashid: He's already shown that he was the right choice as captain against one of the best teams in the world. Captaincy didn't affect his batting at all, he was as good as he has been. He's a clever cricketer and very switched-on regarding who to bowl and when to bowl them. He's the right choice as England captain and hopefully he can carry that on as captain and with the bat.


PakPassion.net: We are seeing a resurgence in young leg-spinners around the world, that must be heartening?

Adil Rashid: Yes, there are some fine young leg-spinners showing their credentials. Shadab Khan from Pakistan, Mason Crane for Hampshire and Matthew Parkinson at Lancashire all look very promising. There are many others who are doing well especially in the shorter formats. Having a leg-spinner in your team is a big weapon. Sometimes things do not go well for leg-spinners but that's just part of cricket but they are match-winners and sometimes they can turn a match on its head. A good leg-spinner is tough for the batsmen especially if they have all the variations.
Discuss!