"I'm not someone who craves being captain, more interested in scoring runs for Pakistan": Babar Azam

Whilst Pakistan's ICC World Cup 2019 campaign ended in disappointment as they failed to reach the semi-final stage, the performances of their star batsman Babar Azam simply confirmed his rising stature in world cricket. In 8 innings for his country, Babar Azam amassed 474 runs which included a splendid 101 not out in a must-win clash against New Zealand.

In an interview with Saj for The Cricket Paper, Babar Azam spoke on a number of topics including what he intends to gain from the current stint with Somerset for the T20 Blast tournament, the qualities that England have which helped them win the World Cup, what impresses him most about Kane Williamson, the comparisons with Virat Kohli and his personal goals for the future. 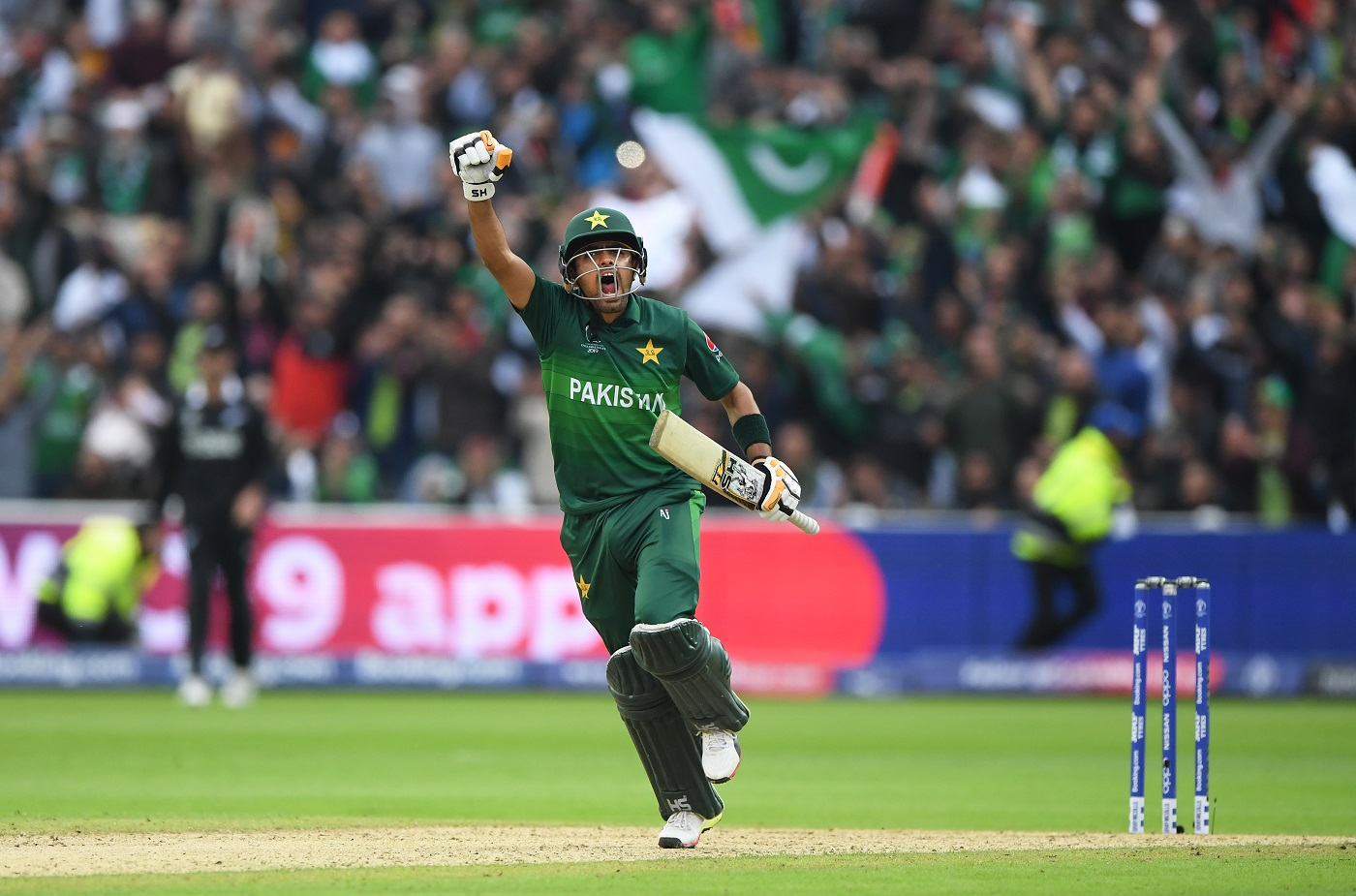 PakPassion.net: What are your targets and aims this season at Somerset?

Babar Azam: Playing County Cricket had been on my radar for quite a while and when this offer came from Somerset I had no hesitation in accepting it. I have always enjoyed playing in England and recently had a fairly successful World Cup, so the target really is to continue my good form at the World Cup into my time with Somerset. It's a great set-up at Somerset and they have really made me feel welcome. It's a County with a great tradition and some of the world's best cricketers have played at Somerset over the years and for me it's an honour to be playing for this great team.


PakPassion.net: What did England have at the World Cup that other teams did not have?

Babar Azam: A team’s openers are crucial in any form of cricket and Jason Roy and Jonny Bairstow most of the time gave England excellent starts at the World Cup. They were very consistent throughout the tournament and when a team’s openers give you a good start, then the rest of the batting order can work with that and feed off that good start. In England’s case, after the good starts by Roy and Bairstow, there was Joe Root who could come in and control the innings with the rest of the batting unit batting around him. In addition, Jos Buttler could come in down the order and smash it to all parts because the openers and the other batsmen had laid the foundation to attack at the end of the innings. When they had runs on the board their bowling attack which I felt was the best in the tournament did what was required of them. I know Jofra Archer received a lot of plaudits for his performances at the World Cup, but Chris Woakes was the bowler who I felt was crucial for them and he more often than not took key early wickets and put the opposition batsmen under pressure.


PakPassion.net: The World Cup was a success for you after you broke the record for the most runs by a Pakistani batsman in a World Cup. Looking back at the tournament, what are your thoughts on what went well and what did not go too well for Pakistan?


PakPassion.net: Pakistan were eliminated from the World Cup due to Net Run-Rate after finishing 5th in the group. How frustrating was it to miss out by the smallest of margins?

Babar Azam: Two matches really cost us and hit us hard. Firstly there was the heavy loss to West Indies which seriously damaged our Net Run-Rate and then the next setback was the defeat to Australia where we were on course to win, but quick wickets hit us hard and we ended up losing a match we should have won.


PakPassion.net: Do you feel that the century against New Zealand silenced some of your critics who had been questioning your ability to take Pakistan home in close and high-pressure matches?

Babar Azam: In all honesty I've never listened to the critics or worried about what they are saying or writing about me. Everyone is entitled to their opinion, everyone has the right to say what they like but my job is just to focus on my cricket and ensure I am doing the best I can for my country. I think the critics will always be there for everyone and in every sport, so if you are worrying about them then you are not completely focused on what you should be doing. I just think about what my captain and coach want me to do for the team and what their plans are for me as an individual and for the team. The innings against New Zealand was a testing one as I had to start cautiously because we had lost an early wicket and I had to assess the nature of the pitch. In addition, when Mitchell Santner came onto bowl he was getting a lot of turn so we had planned that we were going to play it safe against him and ensure that he didn't take a wicket as that could have left us in a very difficult position as a team. My plan was to just try to milk Santner for singles and to be a little more aggressive against the pace-bowlers. It wasn't easy out there and my focus was just to be there at the end and see the team home on a very tricky pitch.


PakPassion.net: You seem to rarely show much emotion on the cricket field. Is that the real you?

Babar Azam: I do get angry, but only with myself when I make a mistake. There is no point getting angry or emotional with team-mates or opponents as I feel that doesn't help in difficult situations and it doesn't help your own temperament if you are getting too emotional and worked-up. I'm quite level-headed on and off the field and I'm not one to get too emotional or cocky about the good times, as sport has the ability to knock you down a peg or two if you are too over-confident.


PakPassion.net: Your critics also state that you lack a power-hitting game. Is that something that you agree with?

Babar Azam: I don't need to answer my critics regarding this. My statistics and performances speak for themselves. I am happy and satisfied with my performances for Pakistan to date and if people want to criticise then they are free to do that. Everyone is entitled to an opinion and sometimes whatever you do is never good enough and you will receive criticism despite doing your best for your team.


PakPassion.net: How difficult is it to remain motivated to play in all 3 formats and how tricky is it to adjust for all three formats?

Babar Azam: Playing for your country does not need any motivation as it's an absolute honour to be given that opportunity. Whatever the format, wherever it is, whenever it is, it's an honour to be wearing your country's colours and representing them on the international stage. I don't really have any problem adjusting to the three formats and just try to adjust my batting according to the format and the match situation. One of the advantages of batting up the order is that you have a bit of time on your side to build your innings. Test cricket is undoubtedly the most challenging format as you have to be more focused on everything you are doing in the 5-day format. There are different pressures in each of the formats and I think success is all about how you cope with all of the differing pressures related to each of the formats. I enjoy playing in all formats and enjoy the challenges that each format brings. I think playing in each of the formats actually brings the best out of me and is improving me as an all-round batsman.


PakPassion.net: Are you tired of the comparisons with Virat Kohli?

Babar Azam: I don't think there is or should be any comparison as we are different types of players. I just focus on my batting and working on my strengths and weaknesses and have no desire to be compared with any other cricketer. I'm sure I speak for most cricketers when I say comparisons are only for fans and the media and we cricketers don't really crave any comparisons or want to be compared to any current or former players as that just creates endless pressure. As great as he is, I don't want to be compared to Virat or any other cricketer, I just want to win matches for my country as that is my only aim.


PakPassion.net: Looking at some of the great batsmen at the World Cup, who impressed you the most?

Babar Azam: I really enjoy watching Kane Williamson bat, apart from when he is scoring runs against Pakistan. What impressed me most about Williamson is the way he paces his innings, the way he plays his shots so late, his calmness at the crease, his timing, the way he handles pressure and the way he leads from the front and absorbs responsibility. He's just a fantastic role-model for any batsman and he is a batsman who I try to emulate. However, I think you can also learn a lot by watching all of the good batsmen around at the moment and I believe you can really improve as a batsman if you take the best components from a combination of good batsmen. If one takes and absorbs from a batsman how he copes in certain conditions, how he handles pressure, how he bats on bouncy tracks or turning tracks, what he is doing to counteract bowlers on seaming pitches then that will definitely improve you as a player and that is exactly what I am trying to do.


PakPassion.net: Javed Miandad recently said that you would be an ideal choice as captain for the One-Day team. Is captaining your country something that appeals to you?

Babar Azam: It's up to the Pakistan Cricket Board to decide whoever captains the teams and in whichever format. The Board will decide who the captain or captains are and the players of course abide by their choice. I've never really thought about captaining Pakistan and have in all honesty only thought about playing for my country. I am not someone who craves being captain and am more interested in scoring runs for Pakistan. Whoever the Board chooses is the right choice and in fact I think Sarfaraz Ahmed is fine and is doing a good job at the moment.


PakPassion.net: Are Twenty20 Leagues a distraction or a help to current players?

Babar Azam: I think that as long as they are not affecting your international performances or availability then playing in Twenty20 Leagues around the world can only be a good thing. You are getting the opportunity to play against and alongside some of the world's best cricketers and that can only be a good thing. It gives you the chance to share the dressing-room and gain knowledge from some great cricketers and it also gives you the chance to play in various conditions around the world and that surely helps you when you play for your country in those conditions.


PakPassion.net: You've enjoyed a lot of success already, but what are your future aims, targets and what do you want to achieve by the end of your career?

Babar Azam: I have not set any targets regarding number of matches or runs for my country as that just creates pressure and I want to avoid that. My only aim has ever been to score as many runs as possible for Pakistan, to win matches for them, to give 100% in every match and every day and to be someone who people remember as a cricketer who gave his all for his nation.