"Sarfraz said to me it was the time to become a hero" : Mohammad Nawaz

Regarded by many as a top candidate for the all-important position of a bowling all-rounder for Pakistan, Mohammad Nawaz has impressed many with a display of maturity beyond his age in his performances for the Quetta Gladiators in the PSL. At twenty-two years of age, he has taken thirty-seven wickets in fifty-one Twenty20 games and continues to show improvement at the domestic and international level.

In an exclusive interview with PakPassion.net, Mohammad Nawaz spoke about his performance with the Quetta Gladiators in the 2017 edition of the PSL, the imminent presence of Viv Richards with the team in Lahore and looked forward to the final of the PSL being played in Lahore. 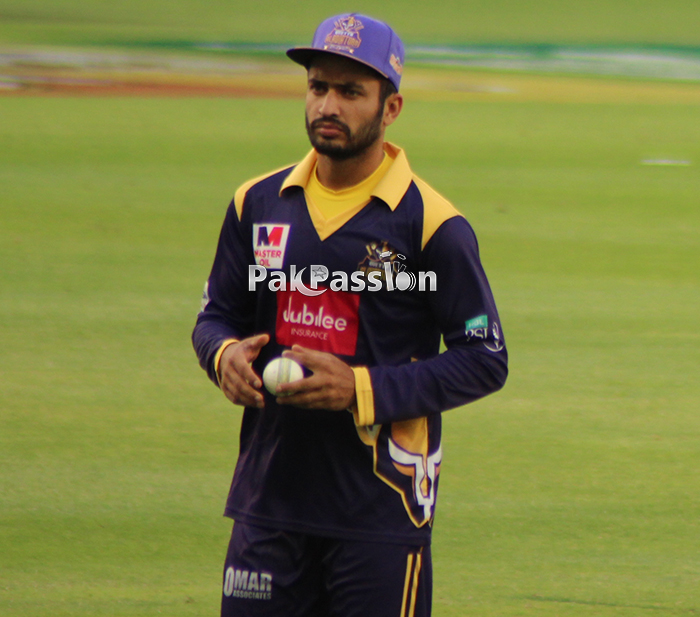 By Amir Husain (4th March, 2017)
PakPassion.net : The last over against Peshawar Zalmi in the play-offs was very tense but you coped really well?

Mohammad Nawaz : I really enjoyed that time as the first thing our captain Sarfraz Ahmed said to me when that final over was about to start was that this was the time to become a hero and show my strengths as a bowler. We had originally planned to bowl at the off-stump but then we changed our plan towards the end of the over to bowl Yorker length, and that worked for us very nicely.


PakPassion.net : Regardless of planning, it must have taken nerves of steel to bowl that over.

Mohammad Nawaz : As I came up to bowl that last over, I said to myself that whatever happens next, I will give it my hundred percent and bowl the best I can. The Almighty helped me in my efforts as it was getting very difficult to grip the ball with all the dew on the ground. My confidence slowly grew as the over went by and I felt that we could win the game which is what happened in the end.


PakPassion.net : How satisfied are you with the way the 2017 edition of the PSL has gone up till now?

Mohammad Nawaz : I felt that the tournament started off well for me. In the first four games, I had some reasonably good figures to show for my efforts. But then there was a dip in my fortunes where I went wicket-less for four games in a row. I suppose this is what the Twenty20 format is all about. You can have a few good games and then somewhere along the line you get hit for some runs. I feel overall I have done well and especially in view of the conditions such as those in the last game where I had to bowl with the ball affected by dew. I suppose the Twenty20 format is all about entertainment and runs can flow with ease, but I have learned a lot from this tournament and hopefully will only improve further in the future.


PakPassion.net : Was there a noticeable difference in the pitches used for this year’s PSL in the UAE as compared to the previous year?

Mohammad Nawaz : In my view, there is definitely a great improvement in the quality of pitches for this year’s PSL. Apart from one or two games where the ball seemed to grip and spin extra-ordinarily, most of the other pitches were very sporting and resulted in very competitive games. As we saw, quite a few games went all the way to the last over and even the last ball which was great for the spectators to watch. The pitches helped both the batsmen and the bowlers pretty much throughout the tournament in UAE which was excellent.


PakPassion.net : How big a boost is it for the Quetta Gladiators that Sir Vivian Richards will be with your team in the final?

Mohammad Nawaz : I have been here for a few days now and I can't wait any longer to see Viv Richards on our soil to support our team. I have to say that I am feeling very proud and happy that a player of his stature and a true legend of the game will be amongst us in Pakistan very soon. What he is doing to support Pakistan cricket by coming over is simply amazing, especially if you consider the fact that other foreign players have refused to visit Pakistan for the final. As a mentor, he has been great for all of us as he always talks to us before and after the games and gives us advice. He really helps us build confidence in our abilities and you feel good and special that a player with such vast experience is advising you on your game. This is just an amazing experience for any youngster.


PakPassion.net : How are you feeling about the PSL final in Lahore?

Mohammad Nawaz : In the few days I have spent so far talking to friends, family and other Lahorites, I can tell you that the only topic being discussed is the upcoming PSL final. They all seem to be talking about the teams, tickets and anything else related to the final. Whether it’s in person or being discussed on the television screens, there seems to be just one topic on everyone’s minds which simply shows the excitement around this game. Personally, I am also very excited about this and really happy for people in Lahore as they will get to see a game of such quality after a very long time. I am not joking but I tell you that it feels like we are a day away from the Eid festival; such is the spirit amongst everyone in Lahore. This is a great sign for our cricket and obviously excellent for any young cricketer like me, as we will get to play in front of our home crowds. I can tell you that playing in front of a large crowd is a great opportunity for any player to learn to perform under pressure which can help him in his career.


PakPassion.net : How confident are you that Quetta can go one better this year and win the PSL trophy?

Mohammad Nawaz : The loss in last year’s final was very unfortunate for us but this year, we have a lot of confidence in our abilities to win the trophy. Our morale is very high and we feel that we have done enough hard work to come this far and God Willing, each and every squad member is very committed to winning the final.


PakPassion.net : Do you feel that the competition for spinning all-rounders has really become very tough?

Mohammad Nawaz : My only concern and aim is to concentrate on my own performances. I need to ensure that I learn and put into practice any lessons I have picked up and to continue to improve myself day-by-day. I am not afraid of others doing well as I believe that such competition only improves you as a player. In this way, you tend to work harder to improve your skills and that in turn, is a great sign for Pakistan cricket.
Discuss!