"I had to tell myself being in the same team as Kevin Pietersen was not a dream" : Hasan Khan

Eighteen-year-old Hasan Khan's name came into the limelight after his fantastic performances during the recently concluded Pakistan Super League. The youngster from Karachi made his debut with the PSL a memorable one as he picked up nine wickets for the eventual runners-up, Quetta Gladiators.

In an exclusive interview with PakPassion.net, Hasan spoke about his impressions of the PSL, his interaction with the legendary Viv Richards and Kevin Pietersen, the feeling of playing the PSL final in front of a home crowd and his future aspiration to play for Pakistan. 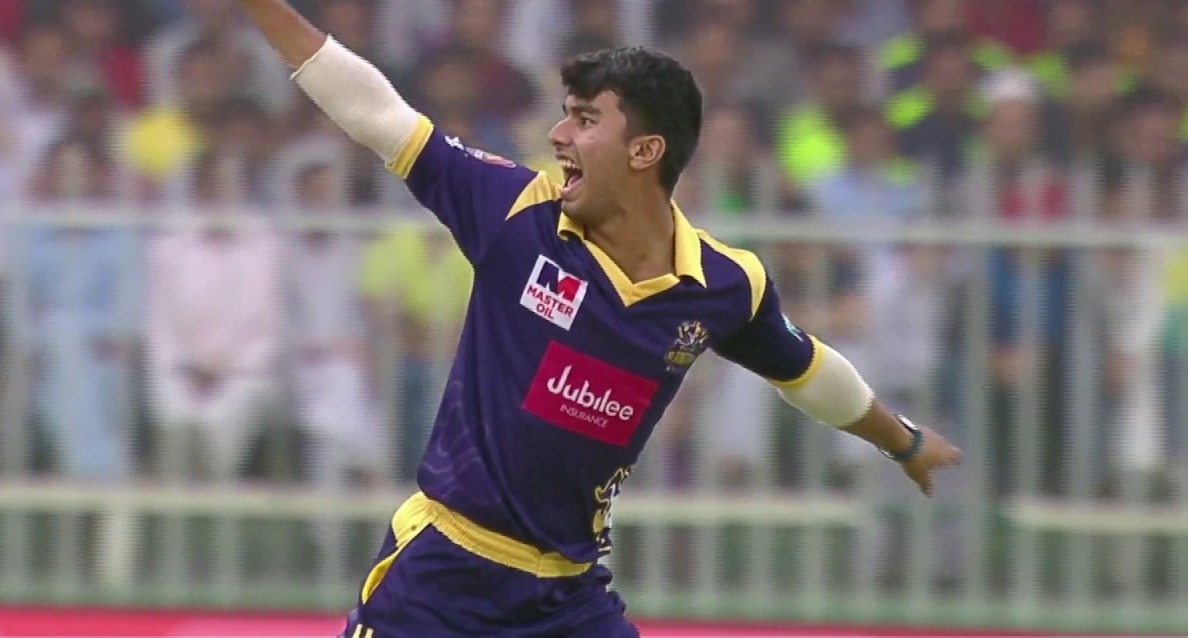 PakPassion.net : Tell us a bit about your background and your interest in cricket?

Hasan Khan : My interest in cricket was ignited from a young age thanks to my father who would take me to local cricket matches. Later on, I started my cricket in the Under-12s then I progressed to zonal cricket where I played for Karachi Zone Six and Karachi Zone Six Under-19s. I also had the honour of leading Karachi Zone Six Under-19s to some excellent victories in 2016. I am now awaiting my First-Class debut but thankfully, I have managed to achieve some milestones such as playing in the Pakistan One-Day Cup in 2016 and the Pakistan Super League (PSL) in 2017.


PakPassion.net : Which player is your role model?

Hasan Khan : I don’t really have one player who I have followed or copied all my life but if there is one player that I admire for his fighting qualities, then it has to be our captain at Quetta Gladiators, Sarfraz Ahmed. Amongst spinners, I am very impressed by Iqbal Qasim who had been my mentor at the National Bank Cricket Academy. He guided and taught me a lot and for that I really appreciate him and hold him in high regard. To this day, I follow a lot of his advice and the results are there for all to see.


PakPassion.net : What were your impressions of the PSL?

Hasan Khan : First of all, I would like to thank the management of Quetta Gladiators for taking me on for this tournament and putting their trust in my abilities. As for the tournament, it was a great experience for me. Just the fact that I was sharing the dressing room with some top quality international players like Kevin Pietersen and my captain Sarfraz Ahmed was amazing. Sometimes, I had to tell myself that this was not a dream and that I was in the same team as Kevin Pietersen. I was practising and playing alongside such quality players which is something I couldn’t have dreamt of doing a few months back. Of course, the whole feel of being part of a high-quality tournament was an experience which I will also remember for a long time to come. For someone like me who is yet to play international cricket, this was as close to playing cricket at the top level as I have ever experienced and I loved it.


PakPassion.net : What were your interactions with Kevin Pietersen and Viv Richards like?

Hasan Khan : I felt very privileged to have had the chance to speak to both of these greats. Viv Richards is a legendary batsman and he spoke to all of us about how to tackle tough match situations and about the mental side of our game. He told all of us to have the belief in ourselves to take on any kind of opposition. His aim was to tell us that we had the ability to overcome any kind of hurdles as long as we stood together as a team and focused on our tasks.

With Kevin Pietersen, he would talk to me during the game on the field where he would build my confidence and also advise me on where to bowl to certain batsmen and the type of field placings which were needed for my bowling. His advice wasn’t just limited to game time but he was also very active in helping out during practice which was great for a young player like me.


PakPassion.net : You literally became famous overnight, how did that feel?

Hasan Khan : To be honest before the tournament began, I was somewhat confident that I would do well but I didn’t expect to become so well-known, so it felt really good when that happened and it was like a dream come true. The challenge for me is to perform in the same way again and again so that people start to recognise my name even more than they do now after the PSL. I always intend to put in my hundred percent in every game and I do thank the Almighty for helping me succeed in the way I have done so far.


PakPassion.net : Were you surprised at the faith shown in your abilities by Quetta Gladiators?

Hasan Khan : It was extremely heartening for me to know that my captain Sarfraz Ahmed and coach Moin Khan had great trust in my skills. Throughout the tournament, both Sarfraz and Moin spoke with me to build my confidence. Not only did they encourage me to be myself, they also never put extra pressure on me at any point whether I was batting, bowling or fielding.


PakPassion.net : How did it feel to be playing the PSL final in front of a home audience in Lahore?

Hasan Khan : It was simply an incredible feeling. The support we had from our home crowd was something I had not seen or felt before. I felt proud of the fact that we were bringing this tournament back in front of our own people and I am sure they also felt pride for this event as well. I hope and pray that this is just the start of many more such occasions in the future.


PakPassion.net : It must have been a little disappointing to not be on the winning side in the PSL final?

Hasan Khan : There is no doubt that we were all disappointed to not have won the final after coming so far. However, what we were really happy and proud about was the manner in which we fought our way through some tough times in this tournament. We had some high scores to chase which we did to win and we fought back in what looked like some impossible situations. There was sadness that we couldn’t finish the job but then we had some problems like our main foreign players were missing so our team combination was affected by this.


PakPassion.net : What was the most enjoyable part of your PSL experience?

Hasan Khan : Apart from the fantastic organisation of this tournament, what was most enjoyable for me was the exposure that I got during these few weeks. I got to play in front of the television cameras which were showing these games worldwide and I was playing alongside and against some of the top world-class players. Whilst the best part of the PSL was my own tournament debut which I made against Lahore Qalandars where I picked up two wickets and also scored sixteen runs, in terms of the moment I enjoyed the most was when I took the wicket of Misbah-ul-Haq. Since Misbah is one of the top batsmen from our country, his wicket really meant a lot to me. These are all great memories of my participation in the PSL and something I thoroughly enjoyed.


PakPassion.net : Are there any areas of improvement in your bowling that you are looking to concentrate on in the future?

Hasan Khan : One can never really stop learning in cricket and for me one area I want to work on a lot is to try and spin the ball much more than I do now. But then I want to be the complete package so apart from excelling in fielding, I also want to improve my batting, with the aim of becoming a good all-rounder as well.


PakPassion.net : It must have been disappointing to miss out on for selection for the Pakistan Under-23 squad?

Hasan Khan : First of all, I would like to congratulate Pakistan Under-23 team for reaching the final of the Emerging Teams Asia Cup. I would be lying if I said that I wasn’t disappointed at not being picked for this tournament but as a cricketer, one has to be prepared for ups and downs in their career. Sometimes you get selected and at other times you are not picked due to reasons which are best known to the selectors. What I do believe is that all things happen for a reason so I am not too concerned. My job is continue working hard and in that sense, the upcoming Pakistan Cup is a perfect opportunity for me to perform well and impress selectors. I am looking forward to this tournament and my preparations are coming along well for this tournament.


PakPassion.net : Are you worried that you will be termed a Limited Overs specialist due to your consistently good performances in such competitions?

Hasan Khan : It is true that I have done well in the Limited Overs formats but like all other players, I also want to succeed in the longer format of the game as well. I want to perform in four-day games as well if given the chance but then my aim is to excel in any format that I play in.


PakPassion.net : What are your aims for the future?

Hasan Khan : My most immediate goal is to do well in the upcoming Pakistan Cup but beyond that, I would really like to be considered for Pakistan ‘A’ assignments. I know for that I have to work very hard and get myself noticed by the selectors and who knows that I may also be picked for the national squad in the future.
Discuss!