"Umar Akmal's best cricketing years are ahead of him" : Kamran Akmal

Kamran Akmal at thirty-five years of age recently made an international comeback for Pakistan after almost three years. His comeback was on the back of some superb domestic performances and a successful Pakistan Super League campaign for the title winners Peshawar Zalmi. On the tour of the West Indies, Kamran Akmal played all of the T20I and ODI games, scoring 90 runs in four T20Is and 68 runs in the ODI series.

In an exclusive interview with PakPassion.net, Kamran Akmal spoke about the experience of making a comeback for Pakistan after a three year period, the irrelevance of age when judging suitability for selection for the Pakistan team, fitness issues surrounding Umar Akmal and looked forward to a spot in Pakistan's ODI squad bound for the upcoming Champions Trophy in England. 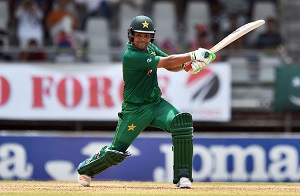 PakPassion.net : How satisfied are you with your comeback to the Pakistan team during the tour of the West Indies?

Kamran Akmal : I am grateful to the Almighty for this opportunity. However, I would like to say that the comeback was based purely on my good performances during the past few domestic seasons. What is most pleasing is that the selectors took this aspect into view before making decisions. How one performs once back in the team is something no one can predict but in my case, all I could do was to work hard and the rest was due to the Almighty. I am very thankful to the selectors and team management for allowing me ample opportunities to perform in the recently conclude ODI and T20I series against the West Indies.


PakPassion.net : It must have felt strange to walk back into the dressing room after such a long absence from the international squad?

Kamran Akmal : It was an amazing feeling and once again, I can only thank the Almighty for His blessings. I made a return to the Pakistan dressing room after three years. But the comeback was on the back of performances and fitness which I have maintained really well during the period I was out of the Pakistan squad. The good domestic performances that I put in have brought me back to the team but then it’s not just me who was rewarded for domestic form. We also have examples of Usman Shinwari and Asif Zakir who have been picked for their domestic performances and this is the way it should be, instead of picking players for one good performance and then discarding them if they don’t perform well after one outing.


PakPassion.net : Do you feel that age is a factor that hinders your future role with the Pakistan team?

Kamran Akmal : I fail to understand what age has to do with performance. When we can have a forty-two-year-old Misbah-ul-Haq as well as Younis Khan and Shoaib Malik playing for Pakistan, they are obviously playing because they are fit. Then we have the example of Sachin Tendulkar who played until forty but there is no criticism of him playing until that age. So, it seems that Pakistan players are singled out more whenever the question of age comes up. The age factor seems to be discussed a lot in the media where really the emphasis should be on fitness and performances and nothing else. We have so-called experts and former cricketers like Sikander Bakht sitting in TV shows making all sorts of comments about the ages of players and really, they should be careful about such statements. The only thing that matters is the quality of performance and a person’s fitness, nothing else is relevant when discussing suitability for selection.


PakPassion.net : How do you respond to the criticism of your fielding from some quarters?

Kamran Akmal : It is definitely not easy for someone like me to start fielding after wicket-keeping for almost twenty years. But, I am grateful to the team management as well as the team for their support in this new role. I have given it my hundred-percent in the field but let me say that no player can be considered a natural fielder. It requires a lot of practice and hard work to become a good fielder. As for me, I will continue to work on my fielding and answer the critics with my performances in the field. Like I said, it’s all about hard work and I am continuing to work with the NCA fielding coach Abdul Majeed to improve on this aspect of my cricket.


PakPassion.net : How tough is was it as a wicket-keeper all your life to then be in the outfield?

Kamran Akmal : I did enjoy my stint as a fielder and there was nothing unnatural about it for me. I was lucky to have some excellent examples of good fielders in our team such as Mohammad Hafeez and Shoaib Malik. Both of them backed me and helped me train for this task. I did not feel any extra pressure whilst fielding and really enjoyed myself when playing for Pakistan. Its only logical that if you enjoy fielding then your fielding will also improve. The key for me was to remain relaxed and not think too much about this task.


PakPassion.net : What are your impressions of Sarfraz Ahmed’s captaincy?

Kamran Akmal : He is an outstanding captain. He defeated a strong side like England in his first outing as T20I captain, then followed it up with series victories against the West Indies and then took on the mantle of captain for ODIs and also won his first series as well. This is great for Sarfraz and above all, it's fantastic news for Pakistan too as the team has worked very hard under him to win these games. Whilst he is new as a captain at the senior level, he has already got considerable experience at the junior level. In my view, to have a successful national captain, there needs to be good work put in at the junior level. Not only has Sarfraz lead Quetta Gladiators in the PSL, he has also been captain at the Under-19 level and is a great prospect for Pakistan. I expect Sarfraz to improve even further as captain of Pakistan.


PakPassion.net : How difficult is it to captain a side whilst being a wicket-keeper?

Kamran Akmal : There is no doubt that being a captain by itself is quite tough. Having the added responsibility of being a wicket-keeper adds even more pressure on the captain. What does help is if the team members are well aware of their roles as that can alleviate the pressure off the captain. Remember the captain has to lead and take decisions on the field, concentrate on his wicket-keeping and when the time comes, also has to bat to help the team. If we look at Sarfraz, we can see that he is working very hard on his role and is doing an excellent job in all three areas expected of a captain who is also a wicket-keeper batsman.


PakPassion.net : Do you agree with the proposed policy to have one captain for all three formats?

Kamran Akmal : I do not believe that players need to be concerned with this decision. This is the job of the PCB and they are best qualified to make that decision. For us as players, we need to work on our skills and performances and make sure we put in our best performances, regardless of whoever is the captain.


PakPassion.net : How big a loss is it for Peshawar Zalmi to see Shahid Afridi join Karachi Kings?

Kamran Akmal : When a player of the stature of Shahid Afridi leaves any team, the impact will be huge. The Zalmi team will miss Afridi as he has been an outstanding performer for us in the two editions of the PSL. His role in our eventual triumph as champions was amazing and we will really feel his loss. It also goes without saying that the team who he has joined will greatly benefit from his presence. There is always pressure when great players and match-winners leave your team. It is for us at Zalmi to now get over this loss and continue playing for the benefit of our team as that is what professionals do. We should focus our energies and look to the future and continue to put in top performances for our team.


PakPassion.net : Umar Akmal’s fitness has come under a lot of criticism, what advice do you have for him?

Kamran Akmal : Firstly, I would like to say that Umar has good fitness now. The selectors, including Inzamam-ul-Haq recently tested him for fitness and he was fine and passed the test. My only advice to him or anyone for that matter is that you need to work hard to maintain your fitness. This is the demand of the professional game. In Umar’s case, he has always been very fit but unfortunately, he did not pass the test for the squad for the West Indies tour. But since that time, he has worked hard and cleared fitness tests quite easily. He needs to stay fit for his own sake and also for the future of Pakistan cricket.


PakPassion.net : Are Pakistan destined to see even better performances from Umar Akmal in the future?

Kamran Akmal : There is no doubt in my mind that Umar has a great role to play in Pakistan cricket in the future. But, one has to remember, that you are only useful for a side if you can perform at a consistent level. Umar has been playing for Pakistan for a while now and sooner he starts to play long innings and win games for Pakistan, the better it is for Pakistan. I feel Umar's best cricketing years are ahead of him.


PakPassion.net : Are you hopeful of playing a role in Pakistan’s upcoming Champions Trophy campaign?

Kamran Akmal : I am always hopeful of playing and doing my best for Pakistan, regardless of which tournament or match that they are playing. It is my hope that I will be selected for the Champions Trophy squad. My comeback during the West Indies tour was a little up and down but then the pitches weren’t that easy or conducive for run-scoring. It is my wish that when I am next asked to play for Pakistan, I am able to play those long innings and win games for Pakistan and repay the trust in my abilities.
Discuss!