"I have toughened up mentally after having faced some adversities" : Umar Amin

Regarded as one of Pakistan's most promising batsmen, Umar Amin has to date played 29 times for Pakistan. A stylish left-hander, Amin last played for Pakistan in October 2014, whilst his last Test appearance was way back in 2010. Now 27, Amin has shown promising signs and good form once again in domestic cricket.

In an exclusive interview with PakPassion.net, Amin spoke about areas of his game that he has worked on resulting in improvements, the recent Pakistan Cup tournament and his belief that he can serve the Pakistan team once again. 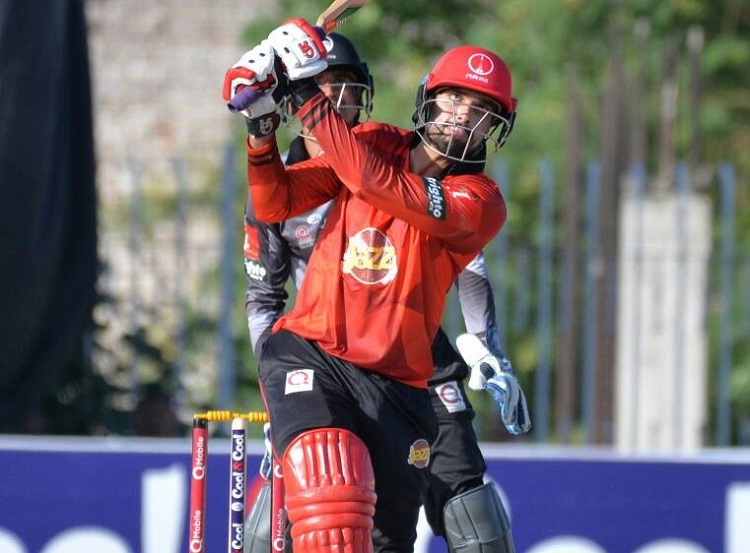 By Amir Husain (5th May, 2017)
PakPassion.net : What was your impression of the recently concluded Pakistan One Day Cup tournament?

Umar Amin : Firstly, I would like to thank the Almighty as my personal form in the Pakistan Cup was excellent. I really enjoyed playing in the tournament as the standard of play was exceptional, as was the quality of the pitches. Most matches had scores of 300 or more by teams batting first but more importantly, even scoring something like 350 was not deemed to be safe on such excellent pitches. This is pretty similar to international pitches which are flat in nature and such scores are common. We were all lucky to have had the chance to play on such pitches where the teams scored over six runs an over on a regular basis. Of course, on a personal level, I am satisfied that I played three innings and finished as the fifth highest scorer in this tournament with two centuries to my name.


PakPassion.net : The confident Umar Amin of 2010 seemed to reappear in 2017 in the Pakistan Cup. Would you agree with that assessment?

Umar Amin : The fact is that similar to when in an off-season, a professional player will always work on his shortcomings and I have worked on my weaknesses during my time away from top-level cricket. Specifically, I worked on my fitness levels and also put in effort on my strength training as well. I have put in a lot of emphasis to fix areas that I felt that I was weak in. I gave special attention to the mental side of the game and played with a lot of composure during this tournament and it seems that things went according to my plans.


PakPassion.net : You had a confident start to international cricket in 2010 but was there some pressure on you which didn’t allow you to fulfil that promise?

Umar Amin : I really don’t think there was any extra pressure on me than one would expect for someone playing international cricket. There was nothing which would push me away from my natural game but I suppose luck also has something to do with it as well. You need good fortune sometimes which allows you to play those one or two special innings which can give a good impetus to your career and probably cover up for any failures along the way. Unfortunately, I never got to play such innings or bat at a specific position in the batting line-up which I could settle into and establish myself in the team. I feel that I have matured a lot after spending time in domestic cricket and have toughened up mentally after having faced some adversities along the way. I am much more dedicated now to my cricket and also have improved my fitness which is great for my future.


PakPassion.net : What shortcomings, specifically, did you work upon?

Umar Amin : I had some issues with fitness and strength where I would rely solely on timing for my shots. Given that international cricket has become very fast-paced and some amount of power-hitting is needed, I put in some effort in that aspect and the results of that were obvious in my performances in the Pakistan Cup. In the three innings that I played, I hit twelve sixes which is the most number of sixes in the Pakistan Cup which clearly demonstrates that I am now able to step-up a gear and play the big shots when needed. The other change I have made is to play with a free-mind in that whenever I go into bat, I calmly assess the game situation as well as the pitch, and try and keep things as simple as possible. The idea is to adapt to the current circumstances and then play with confidence.


PakPassion.net : Does it bother you that despite your fantastic performance in the Pakistan Cup, you were not selected for the Champions Trophy squad?

Umar Amin : I am one who believes that one should never let go of hoping for a better future. If I have missed selection for the Champions Trophy then I am hopeful that I will be picked for the next series by the selectors. If even that doesn’t materialise then I will continue working and try to improve myself further, and so on. I will continue to knock on the doors for selection by maintaining my fitness and putting in better performances.


PakPassion.net : Is it not shocking that a player with such promise has just played only 29 times for Pakistan?

Umar Amin : In a sense, I am pleased that I have played for Pakistan 29 times so far, but then it is disappointing to know that I haven’t been able to play more since 2010. If we look at my career, one can see that I have made a few comebacks during this time and at different batting positions and game scenarios. I have never played in the same position in back-to-back games. On top of that, whilst I may have played 10 T20Is, I only batted six times in those games. What that shows is that I have not been given consistent chances in the way you would give to a young player as he is introduced to international cricket.


PakPassion.net : Do you feel that our selectors are not in favour of including left-handed middle-order batsmen such as Fawad Alam and yourself?

Umar Amin : I would leave that to the selectors to answer but as far as we as players are concerned, we simply need to put in the hard work and performances which bring us to their notice for selection. We need to improve our performances and deliver as much as we can on the field as players.


PakPassion.net : Give us your thoughts about the glorious careers of two of Pakistan’s most respected players, Misbah-ul-Haq and Younis Khan?

Umar Amin : The trend that these two players have set in terms of showing that age is just a number is simply amazing. As we know, Younis Khan and Misbah-ul-Haq are two of the fittest players in the Pakistan team. Apart from fitness, the dedication and hard work which they have put in to their game is a shining example for all of us. I have seen both of them train with dedication at the NCA in Lahore, where they regularly put in many hours to work on their batting and fitness. The statistics and achievements of both are clear proof and just rewards for their hard work in this game. We can only learn from such players and hope that we can come close to the high benchmark they have set. All youngsters now have some great examples in the shape of these two players to not only follow in terms of their cricketing skills, but also to learn to never to give up in the face of criticism as has been demonstrated by Misbah. In the same way, Younis Khan’s achievement of being the first Pakistan batsmen to reach 10,000 Test runs is a huge achievement and a matter of pride for the nation.


PakPassion.net : Can you fill the gap left by the retirements of Misbah and Younis?

Umar Amin : I don’t see why not! I have never doubted myself about the fact that I cannot take the place of any top batsmen such as Misbah or Younis in the team. I have the ability to do that purely based upon my performances and that is indeed my goal which is to prove my utility through my performances and to have what it takes to step into the position of anyone of these distinguished batsmen.


PakPassion.net : At the age of 27, you must feel that you are at the peak of your fitness and skills?

Umar Amin : Absolutely and quite apart from the fitness aspect, I feel that it is now that I truly understand what batting is all about. Looking back, I feel that I wasn’t doing justice to my talent in my younger years where the idea was to just walk in bat and be done with it. With experience and age, I have a much better understanding of how to bat in different conditions. Now, I also have a good understanding of assessing a bowler and working out what shots to play against him, and also be able to judge the nature of the pitch. All these abilities have come to the fore after gaining experience over so many years of playing cricket.


PakPassion.net : How has playing at club-level improved your game?

Umar Amin : I must give credit to club cricket for a lot of improvement in my game as I have played this level of cricket a lot in the recent past and the results are there for all to see. I have taken part in Twenty20 and One-Day games at the club level and as we all know, the demands on fitness and skills at this level are pretty unique and tough. The pitches at club level are not usually of a high quality and one has to adjust one’s game to be successful at that level. Such experiences can only improve you as a batsman.


PakPassion.net : Would you say that you have the skills to represent Pakistan in all three formats of the game?

Umar Amin : All I will say is that I can only work on things that are under my control. I will put in my level best to maintain my fitness and form, and with good performances will continue to knock on the door of the selectors. I am very happy and satisfied with my game at the moment and God Willing will improve it even further. I am forever analysing my own performances by watching videos of my batting and I am making sure that I will continue to overcome any deficiencies so that it benefits me in the future. Let me add that I am not one of those who gives up easily and start thinking that they will never get another chance to play for Pakistan or will never be good in domestic cricket, or their fitness can never be improved further. I will continue to work towards an international comeback and will take my performances to that high a level which will make the selectors take notice of me, regardless of the format.


PakPassion.net : What does the future hold, do you feel that your best years in cricket are ahead of you?

Umar Amin : I have to agree with this sentiment as I feel that I am just getting started as far as my career is concerned. I feel much more mature and my future in cricket looks as bright as ever. I intend to make full use of any opportunity given to me at the international level. I intend to apply myself if given a chance and grab that opportunity with both hands. I am patiently waiting for this chance to come and will make full use of it when that time comes.
Discuss!