"If a ball is there to be hit, I will try to smash it out of the park" : Sahibzada Farhan

One of the most talked about talents of the recently concluded Pakistan One Day Cup, 21-year-old Sahibazada Farhan leapt into the limelight as the third-highest scorer in the tournament. In just five innings he racked up 331 runs scoring one century and four fifties with an impressive strike rate of 103, drawing praise from experts and fans alike.

In an exclusive interview with PakPassion.net, Sahibzada Farhan spoke about his run-filled journey to First-Class cricket, experience of playing the Pakistan One Day Cup and his aspirations for the future including a possible place in one of the Pakistan Super League teams. 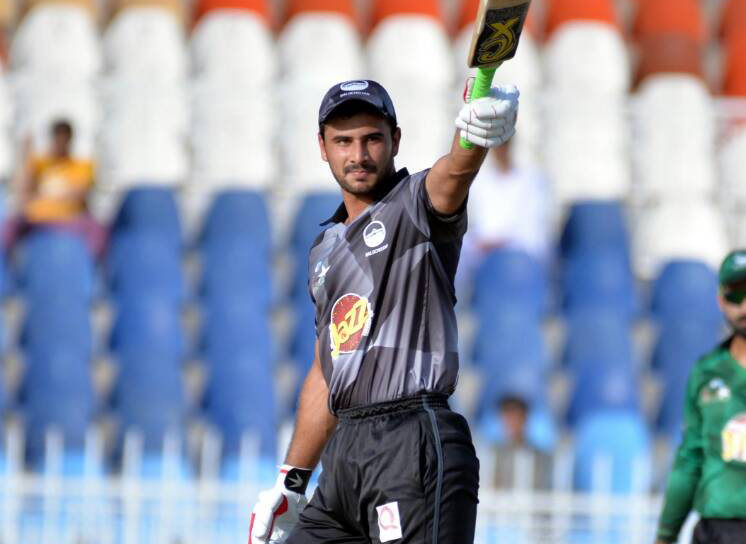 PakPassion.net : How did you start to play cricket? Was there family support for your passion for the game?

Sahibzada Farhan : I started to play cricket from a very young age in Charsadda. The games were played using a tennis ball or tape-ball when it was available. There was no way to play hard-ball cricket for me in Charsadda but all that changed once my family moved to Peshawar. There I joined the Peshawar Gymkhana Club in 2008. This was a difficult phase for me as my family had come to the city for me to have better opportunities in education but my real interest was in cricket. So, I had to sneak out during the day to practice and play cricket and whilst my father did understand the importance of cricket to me, it was my uncles who did not see this as a proper career. Thankfully, my father's views prevailed.


PakPassion.net : Was batting your preferred speciality when you started off playing cricket?

Sahibzada Farhan : I started off as a fast-bowler during my time with the Gymkhana Cricket Club as I was advised by all that this would be a good way to make progress in my career. I wasn’t too good at fast-bowling and in two years with the club I couldn’t achieve much with this skill. In fact, I only got to play 2-3 games during this period which was very disheartening. I used this time to concentrate on my studies whilst playing tape-ball cricket on the side, and finally in 2011, I started my cricket again but this time as a batsman.


PakPassion.net : It must have been a difficult choice to turn yourself into a specialist batsman?

Sahibzada Farhan : Yes, it does sound strange but the way this came about is that a friend of mine took me to play in a local game where I excelled with the bat, playing all sorts of attacking shots like cuts and pulls. At this point, my friend told me to forget the past and restart my career as a batsman playing hard-ball cricket, as I was really good at it. I argued with him against doing this but my friend insisted that I play for his club and I reluctantly agreed, and then never looked back. After practising a few months with my new club, I played a PCB organised 45 over inter-district club tournament. In the first game I played, I scored 136 then 149 in the next game and 132 in the third game I played in this tournament. This was the point when my name started to become recognised in local cricketing circles and it was a major turning point for my career.


PakPassion.net : You seemed to excel at the District Under-19 level; Was this an easy jump for you to make from club cricket?

Sahibzada Farhan : It was a pleasant surprise to be asked to play for Peshawar Under-19s. Basically, this was based upon my performances up to 2012 which lead me to try out for Peshawar Under-19s. But, there was a slight problem. I had no friends or supporters who could further my career at this point and there was some level of jealousy about my inclusion in the Peshawar Under-19 team. A lot of people were thinking that I would be a flop at this level and I had a feeling that they were praying for my failure. However, I was supported by my coaches, especially Fazl-e-Akbar who proved to be a staunch supporter for my case. The general feeling was that I would fail badly in the trial games and would be dropped but that did not materialize as I put in some excellent performances in these games. In the first few matches I played for Peshawar Under-19s in PCB's Inter-District Under 19 Tournament 2012, I had scores of 133 and 92. This opened a few eyes that year but the same critics couldn't believe their eyes when in 2013 in the same tournament, I racked up scores of 167, 62, 11, 53, and 200*.


PakPassion.net : With such performances, one would have expected you to be a natural selection for First-class cricket but you did not make your debut until October 2016.

Sahibzada Farhan : Absolutely, I was feeling great about myself and between 2012 and 2016 I also played Grade II cricket where I did really well. At least to me, it was obvious that I was ready for a place in Peshawar's First-class team but I needed some help to make that jump. The way this happened was that the coach of Peshawar, Abdur Rehman, had watched me play during my district Under-19 days and really liked my style of batting. One thing about Abdur Rehman I will say is that he has great judgement of players’ skills and he also has the ability to develop players with care and attention and so he asked me to play for Peshawar in the 2015 First-class season. Unfortunately, due to appendicitis on the eve of my first game in First-class, I could not play that match. In fact, the whole season was a write-off as I had to recover from the surgery on my appendix and only in October 2016 did I make my debut for Peshawar.
PakPassion.net : What was the experience of playing your debut First-class game like?

Sahibzada Farhan : It was a wonderful experience and as such milestones go, I couldn't have asked for a better start to my First-class career. The debut game was against HBL which had some well-known names like Younis Khan, Ahmed Shehzad and Usman Shinwari in it. Whilst it was a big occasion and I was new to this level of cricket, I performed very well. My nature is such that I am not overawed by the occasion or afraid of any opposition bowler. My batting philosophy is simple. If a ball is there to be hit, I will try to smash it out of the park. And that is exactly what I did in my debut where I scored 86 runs in the first innings of my First-class career. I played seven games in total and scored 497 runs. I really enjoyed this introduction to Pakistan's top domestic form of cricket.

PakPassion.net : Whilst you had a good First-class season, the fact is that it was the recently concluded Pakistan One Day Cup which has really brought you into the limelight, hasn't it?

Sahibzada Farhan : This was a great experience and the fact is that I really didn’t get much time to think about or prepare for this tournament as I was involved in a Grade II tournament during the time the draft process for the Pakistan One-Day Cup was in progress. Fakhar Zaman, the captain of Balochistan, messaged me to say that I would be playing for his team in this tournament and my first reaction was that this was a prank call. It had to be, I thought, as why would they choose such an inexperienced player for such a top-quality tournament? It became clear that Azhar Ali was on Test duty so they decided to take me on for the Balochistan squad. And I am sure, I didn’t disappoint them! From the time the team management saw me in the nets, they told me that they were impressed by me and told me to play in the same way in the matches as well, as they intended to play me in all their games. This raised my confidence to another level as I felt that if a team like Balochistan can have so much faith in me, then surely I can perform to their expectations. Also the knowledge that I would play all games, especially when coming from the team captain Fakhar Zaman, meant a lot to me as well. With the Almighty’s help, I did perform well scoring a hundred and four fifties and was part of the tournament runners-up. I have to say that even when I was playing so well against oppositions, I was very pleased that the likes of Kamran Akmal and Imad Wasim came up to me and congratulated me for my performances during the Cup which was very heart-warming.


PakPassion.net : Which batsmen have impressed you the most, players whom you would consider your role models, perhaps?

Sahibzada Farhan : The player I have watched and admired has always been Ahmed Shehzad but if you ask me about who I like amongst the non-Pakistanis then the answer is simply Sachin Tendulkar as he is in a different class altogether and is a legend. Sachin is my cricketing hero and he is a legendary cricketer.


PakPassion.net : And what about your name? Many people assume that it has something to do with Sahibzada Shahid Khan Afridi?

Sahibzada Farhan : Many people have asked if my first name is connected with Shahid Afridi in any way and the answer is no. We are not related and I don't belong to the same tribe or community. But if there is a similarity, it is in the fact that despite being told by many coaches to play in a different and probably a better way, I always bat in the way I feel most comfortable with, and use the technique which has brought me most success.


PakPassion.net : What does the future hold for you and what are your ambitions?

Sahibzada Farhan : To be honest, I am still a little dizzy with my success from the Pakistan One Day Cup but beyond that, I have some ideas of playing for a department in the next season, although my loyalty has always been with Peshawar. And of course, I am interested in playing in the Pakistan Super League. I have been told that given my recent performances, there is a high likelihood of my selection for one of the teams in the PSL. But all I know is that it is my job to continue performing and it’s the job of the selectors to reward my hard work, God Willing. I really hope I get a chance to play in the PSL and show my skills in that tournament.
Discuss!