Waqas Ahmed has impressed many followers of Pakistan cricket with his recent performances in the recently concluded Quaid-e-Azam Trophy where he was the second-highest wicket-taker with 52 wickets to his name.

In an exclusive interview with PakPassion.net, Waqas spoke about his passion for cricket, his performance in the Quaid-e-Azam Trophy, the controversial run-out dismissal of Usman Salahuddin in the game against SNGPL and his future aspirations. 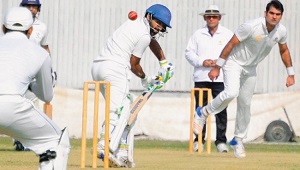 PakPassion.net: How did you develop an interest in cricket?

Waqas Ahmed: Like many youngsters, I was always interested in cricket as it’s a popular game in Pakistan. But, I had a problem as my father was dead against my taking up cricket as a profession. He was of the opinion that education should be my first priority and cricket ought to be treated nothing more than a hobby. To get around this objection, I tried to convince my father that if I played cricket well, that could result in me getting admission in some top educational institutions. But later on, when they found out that this was not true, they completely disallowed me to play cricket anywhere, but I persisted against the wishes of my father. He wanted me to become an engineer but I knew that studies were beyond my capabilities. Disobeying my father's wishes is something I am not proud of, but I had a passion for the game, and I had to do what it took to pursue my love for the game.


PakPassion.net: Have you modelled yourself on some Pakistani bowler?

Waqas Ahmed: When I was growing up, it was the era of fast-bowling which was headlined by Waqar Younis and Wasim Akram. I was called Waqar Younis for my bowling even though being a young boy, I had no real idea of what was so special about Waqar except that he could bowl fast. Later on, when I started to understand what cricket was all about I saw Shoaib Akhtar destroy batting line-ups and that really inspired me to bowl faster. To do this day, he remains my favourite, although I haven’t had the chance to meet and discuss my bowling with him in person.

PakPassion.net: How did you progress to first-class cricket?

Waqas Ahmed: I played cricket at the college level and then after performing at the Inter-District level for Sialkot, I became eligible for first-class cricket in 2009 but due to what can only be described as petty regional politics, I did not get to play a first-class game until 2010 when in my first season for Sialkot, I took 40 wickets. This was very important for me as that gave me a lot of confidence and also put my name in the public eye. I suppose without a backer in Pakistan cricket this was the only way forward, although having no support did hurt my chances in the long run.


PakPassion.net: You were the second highest wicket-taker this year in the Quaid-e-Azam Trophy for a team which was considered very weak, how do you feel about that?

Waqas Ahmed: It is no secret that Lahore Whites was branded as the weakest team in the Quaid-e-Azam Trophy. We had been trying very hard in the previous seasons and we just could not make it past the first round, but this year, I really wanted to make a difference and take my team further in this tournament. I worked very hard and the results were good for the team as we were able to progress to the Super Eight round and could have also made it to the final. It was also great for me as I worked hard throughout the tournament where I was the highest wicket taker for my team and second highest wicket-taker overall in the Quaid-e-Azam Trophy with 52 wickets.


PakPassion.net: You must have been satisfied with your own performances too during the Quaid-e-Azam Trophy?

Waqas Ahmed: To be honest, every year when I take part in this tournament, I work very hard and hope to top the charts by putting in some good performances. I am happy to say that every season I have played in, my performances have been excellent. This year was special as I played a full season and reached the 2nd position amongst the wicket-takers.


PakPassion.net: Tell us your views on the Usman Salahuddin run-out in your team’s game against SNGPL.

Waqas Ahmed: This was simply a mistake by the umpire in my view. The player who affected the run-out did not do so in the spirit of the game. Yes, the umpire responded to the appeal but there was no basis for the appeal in the first place. The umpire felt that the bat fell out of the batsman’s hands, but the fact is that it was the fielder who knocked the bat out of Usman’s grip. We were in the pavilion and saw this on the television but this is what appeared to us. And I don’t blame the fielders for appealing in this case as it is their right to look for wickets but maybe they should have considered the spirit of the game as well. Usman was totally confused by the decision and asked the umpire about the reasons for this decision. He also asked Mohammad Hafeez who was the captain of SNGPL but he just said it was the decision of the umpires and not their problem.


PakPassion.net: Your views on the quality of cricket balls used during the Quaid-e-Azam Trophy?

Waqas Ahmed: In previous editions of the tournament, the balls were of a bad quality. It was quite common for the ball to become soft, lose its shape very early or even burst at the seam. This season we are using Dukes and the ball seems to be holding its shape and there have been no complaints as far as I know. I believe that this ball has been excellent for both bowlers and batsman and is ideal for our domestic cricket. I wouldn’t say that this ball is offering any extra advantage to the bowlers, but it is a fact that it remains harder for long and the shine also stays on for longer.


PakPassion.net: You took nine wickets in the Super Eight game against SNGPL which was an excellent achievement. How did that come about?

Waqas Ahmed: In this game, the wicket was very sporting where a lot of runs were scored in the first innings, with SNGPL scoring 411 and we replied with 344. Despite the ease with which runs were scored, there was help for the fast-bowlers and I was able to capitalise on this support from the pitch. But, I was driven by the fact that it would be a big achievement for me to take wickets against a strong team such as SNGPL. So, in one spell of 12-13 overs I was able to take 5/40 and help dismiss SNGPL for a low 93 runs. We should have won this game, but I believe some key decisions went against us and we were dismissed for 88, and thereby lost the match.


PakPassion.net: What was the most memorable wicket of the 9 wickets you took against SNGPL?

Waqas Ahmed: Obviously, when you get a batsman of the calibre of Azhar Ali out, it does fill you with pride but in terms of the quality of the ball that I bowled then it has to be the wicket of the SNGPL wicket-keeper Mohammad Rizwan.


PakPassion.net: What was the experience of playing Twenty20 cricket in the National T20 Cup like?

Waqas Ahmed: It was an amazing experience as this was the first time I was playing a Twenty20 format game at this level. To be playing your first Twenty20 game alongside such players like Ahmed Shehzad and Mohammad Hafeez was a great learning experience. My selection for the Lahore Blues team was surprising for me as I was selected for this tournament on the basis of my performance in the Quaid-e-Azam Trophy. In fact, the selection decision was only communicated to me on the night of my debut game so the mindset that one needs to have for a Twenty20 game was not there for me due to this. Whilst I may have played less Twenty20 games, I do feel that this is an ideal format for me and I would like to play more of it if given the chance in the future.


PakPassion.net: You have played just 37 first-class games in a career spanning almost 8 years, why is that?

Waqas Ahmed: As I explained earlier, the reason for this is due to regional politics which is damaging domestic cricket, where players from certain clubs are preferred over others and some badly thought-out decisions on my behalf. On top of that, I made a late entry into professional cricket where I only started to play club cricket when I was 19 years old. I played for Sialkot in my first season and took 40 wickets in 7 matches and as a result I got a lot of offers and went over to play for a department. The first match I played for my department, State Bank of Pakistan, I took 5 wickets, but the match was drawn. I was ignored for the next 2 matches and when I asked “mujhay kyun nikala” (why was I excluded from the team), they did not like my attitude; I only played one more match for them before they let me go. I obviously regret asking them, but I feel I was owed an explanation. In the next year, 2012, Sialkot did not allow me back as they accused me of leaving them for a department. In this way, 2 important years of my first-class career were lost which hurt me a lot. I was then accepted back by Sialkot in 2013 but played only a few matches with limited success. I also played Grade II cricket to keep myself in the reckoning and finally moved to Lahore Blues in 2015, where things changed for me. I am sure I could have made more progress if I had been given a proper chance but that is life and I have to accept my fate. All I know is that when given the chance, like this year in the Quaid-e-Azam Trophy, I have proven myself to the world.


PakPassion.net: Will T10 as a format be able to succeed in Pakistan’s domestic cricket?

Waqas Ahmed: I have to say that this format greatly diminishes the role of a bowler to the point that its almost disrespectful. The beauty in what the bowler brings to the table is taken away by this format and that is very sad. Given the conditions, it just seems that it’s a matter of ball making contact with the bat and it will go for a four or six. But from a spectators point of view, I agree that this would bring in people to the stadiums as it is entertaining.


PakPassion.net: What are your future aspirations?

Waqas Ahmed: I have made tremendous sacrifices to play cricket including going against the wishes of my father but in my head there has always been a passion to play for Pakistan. Over many years, any hurdle that has come in my love for cricket has been overcome by my passion for the game. I would like to think that with this determination and the performances in the recently concluded Quaid-e-Azam Trophy, I should be able to find a place in the Pakistan A squad and then move on to the national team as well. There is the Pakistan Cup coming up soon for me to prove my worth in the 50-over format and hopefully that will be another route to the national team in the future.
Discuss!