"The pitches in Pakistan are not ideal for high-quality cricket" : Samiullah Khan Niazi

Declared Man of the Match for his excellent bowling performance which saw him bag 8/62 in the final of the Quaid-e-Azam Trophy, 35-year-old Samiullah Khan Niazi played a key role in his side SNGPL's victorious season. Apart from taking 25 wickets in the tournament, Samiullah also reached the milestone of 500 first-class wickets during the recently concluded Quaid-e-Azam Trophy.

In an exclusive interview with PakPassion.net, Samiullah spoke about his performances during the Quaid-e-Azam Trophy and his satisfaction of reaching the 500-wicket milestone, how PCB can improve the state of pitches in first-class cricket and his future aspirations of making a comeback for the Pakistan side. 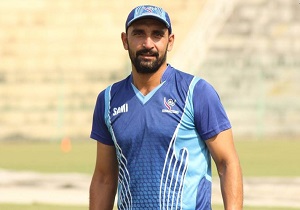 PakPassion.net: You must be really pleased with your performance at the recently concluded Quaid-e-Azam Trophy.

Samiullah Khan: Yes, it's been a great experience for me and the fact that I took 25 wickets during the tournament for my side SNGPL is of course something I am very happy about. However, I am really proud of the fact that I played an important role in my team’s victory in the final against WAPDA with my bowling figures of 8/62. The SNGPL unit is like a family and I am proud to be a part of this setup and my performances in the Quaid-e-Azam Trophy are simply a result of the trust and respect I get from the team and the management.


PakPassion.net: You must also be pleased about reaching the 500 first-class wickets milestone?

Samiullah Khan: The journey to this milestone has been a memorable one for me and of course, it had a lot of ups and downs as one would expect. Along the way, I had to contend with quite a few injuries, but it was all worth it, as I was not only able to get 500 first-class wickets during the final of the Quaid-e-Azam Trophy but also help my team win this prestigious tournament. I simply couldn’t have asked for more and I am thankful to the Almighty for granting me this honour.


PakPassion.net: Whose wicket was the most satisfying one for you during the Quaid-e-Azam Trophy?

Samiullah Khan: Given that the final of the tournament was an important game for us, the two wickets of Adnan Raees and Salman Butt were most memorable as well as crucial for our victory. Adnan was playing really well in the first innings for WAPDA and could have easily taken the match away from us when I got him out on 65, and we all know what an experienced batsman like Salman Butt is capable of so his wicket in the second innings run-chase gave me immense satisfaction.

PakPassion.net: How is the standard of first-class cricket in Pakistan and are there any areas of improvement?

Samiullah Khan: First of all, let me say that this is the toughest standard of cricket in Pakistan and there is nothing easy about first-class cricket at all. To succeed at this level requires immense dedication, skills, as well as fitness. So, the standard is world-class. However I have a humble request for the PCB regarding the pitches used in the Quaid-e-Azam Trophy. At the moment the pitches in Pakistan are not ideal for high-quality cricket. It appears that our pitches have a lot more moisture than is expected on Day 1 of a game. In my view, this is because a 2 days gap between 4-day games is not enough to allow the groundsman enough time to prepare the pitch for the next match. If this gap is increased, then some degree of equality can be achieved between bat and the ball.


PakPassion.net: Are you disappointed that you have not played more games for Pakistan since your ODI debut in 2008?

Samiullah Khan: I played 2 ODI games against Zimbabwe in 2008 but unfortunately, my performances were not up to the mark and I ended wicketless in both games. Any chance of a comeback after these ODI games was badly affected by a knee injury and I missed 2 seasons in 2010 and 2011 in trying to recover and rehabilitate myself. I did make a comeback in 2012 to first-class cricket and then went onto take 80 wickets in the 2012-13 first-class season. Overall, I was very disappointed as I had put in a lot of hard work after my injury and was expecting to make an international comeback, but it did not happen. I am not saddened by this as I firmly believe that whatever the Almighty has ordained for you will happen and I am thankful for whatever respect I have earned due to my performances.


PakPassion.net: Given the sort of bowling resources available to Pakistan at the moment, do you feel that chances of a comeback are very tough for you?

Samiullah Khan: I don’t believe that is true. The selection is completely dependent upon the national selectors. For my part, I am demonstrating my suitability for selection by maintaining my fitness. Since my recovery from injury in 2012 and until now, I have been in excellent physical shape and have also taken wickets. From my side, I have done what it takes but the final decision on my selection is with the selectors and is also dependent upon the strategy for the future as dictated by the PCB think-tank.


PakPassion.net: What are your views about the current standards of batsmen in first-class cricket?

Samiullah Khan: If a batsman is asked to play on a pitch with so much moisture than how can we expect our batsmen to have a good standard of batting? What I am saying is that there is no lack of talent in Pakistan in all aspects of the game and quite rightly so, there seems to be a lot of concern about the deterioration of batting techniques. But I ask you this. If Azhar Ali who is one of Pakistan’s top internationally successful batsmen with an average of more than 46 is struggling to score runs during domestic games, then what does that tell you about the pitches in Pakistan? What is the chance of other batsmen to score more runs when your top batsman is finding it difficult to survive on such domestic pitches?

I really do feel that the PCB needs to pay a little more attention to the quality of pitches as doing that will make a huge difference to the quality of batting that is seen in domestic cricket. Like I mentioned, by allowing more time between games for the groundsmen to prepare pitches, the quality of pitches on which matches are played on will become very good. We saw in the Quaid-e-Azam Trophy final what a well-prepared pitch can do to the quality of the game. Only the bowler who was willing to put in the effort was able to get rewards in this game and for batsmen, whoever was able to apply themselves was able to score as well. The pitch was equally suited for both batsmen and bowlers which is the way it should be. Such a pitch can only be prepared if there is a good 3 to 4 day gap between matches to be played on the same surface.


PakPassion.net: Would you say that the recent good performances by bowlers in domestic cricket are a direct consequence of favourable pitch conditions?

Samiullah Khan: It stands to reason that when you give such lively bowling conditions to bowlers then anyone with even a speed like 110-115 Kph will cause problems to the best of batsmen. If you provide better playing conditions then both batsmen and bowlers will be on an equal footing and only those with the best skills will succeed.


PakPassion.net: Are you in favour of the presence of ‘bits-and-pieces’ players in first-class teams as opposed to specialists?

Samiullah Khan: There is no place in first-class teams for players who can only do part of the job. In a four-day game, you have to play with four specialist bowlers although there can be some differences due to strategies and tactics applied by teams in specific conditions. I really don’t see any need for such players in four-day games but yes, such ‘bit-and-pieces’ players are sometimes a necessity in the shorter formats of the game.


PakPassion.net: Is the four-day game your preferred format for playing cricket?

Samiullah Khan: I have played Twenty20 and One-Day cricket and performed very well in those formats, but my personal preference is to play the longer format of the game. This is the format that really gives me a lot of enjoyment and is really the best test of many aspects of one’s game. So, your skills, patience and fitness are all challenged in a way which the shorter format can never do.


PakPassion.net: Have you been satisfied with the use of the Dukes ball during this season of the Quaid-e-Azam Trophy?

Samiullah Khan: I believe this ball has done well and I really have no complaints about it. But I come back to the same point about pitches. If the grass is reduced, there is less moisture and the hardness of the pitch is maintained as well then, the ball make isn’t much of a concern in my view as it will behave as expected.


PakPassion.net: What does the future hold for you in terms of a comeback for Pakistan?

Samiullah Khan: I have always believed that it is my job to perform to the best of my abilities and it’s the job of the selectors to select me if they feel that I have done well enough. I may not have played for Pakistan as much as I wanted to, but I am not disappointed about it. What I do know is that the Almighty always rewards those who don’t give up and my plan is to continue working hard and to make a comeback for Pakistan.
Discuss!