"I am fit and ready to take the next step up and play for Pakistan" : Hussain Talat

Regarded as a top future prospect for the role of a batting all-rounder for Pakistan, 21-year-old Hussain Talat who also plays for the PSL side Islamabad United, has been in impressive form during this domestic season.

In an exclusive interview with PakPassion.net, Hussain spoke about his achievements during the ongoing domestic season, his ambitions to be recognised as a batting all-rounder akin to Jacques Kallis and Shane Watson, the improvements he needs to make to enable selection for the Pakistan side, what he has learned from the legendary Wasim Akram during his time with Islamabad United and looked forward to working with Waqar Younis in the upcoming edition of the PSL. 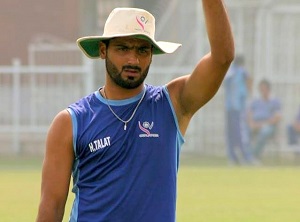 PakPassion.net: How do you feel about your excellent form this season in domestic cricket?

Hussain Talat: I am feeling like I am on top of the world as I was the best all-rounder in the National T20 Cup this season where I put in some superb performances and won two games for the tournament winners, Lahore Blues. My team SNGPL also won the Quaid-e-Azam Trophy in which I took 9 wickets and scored 90 runs in 4 matches. In my stint in the One-Day Cup (Departments), I scored 278 runs in 7 games with an excellent average of 69.50 and have four half-centuries playing in the lower middle-order to my name as well.


PakPassion.net: What do you attribute this fantastic improvement to?

Hussain Talat: I believe the work I have done with Mansoor Rana at the National Cricket Academy has brought me great benefits. This happened during May of last year, where I took part in a 2-week special all-rounder’s camp which was held at the NCA and Mansoor was one of the coaches there. In addition to that, I took part in the High-Performance Camp at the NCA in June where once against Mansoor Rana helped me out. On top of that, I have been very conscientious in putting into practice whatever I learnt from these camps. So, I used many variations in club games such as the slower deliveries, bouncers and yorkers and have worked on increasing my pace as well. In terms of my batting, using Mansoor’s advice as my guide, I worked in the nets on my strokeplay and strike rotation, as well as power-hitting which has really helped me in this season.


PakPassion.net: Which has been the most enjoyable performance so far during this season?

Hussain Talat: The most memorable game this season was in the National T20 Cup where I was representing Lahore Blues against Lahore Whites. I was asked to bowl in the final over and to defend 12 runs which were needed for victory by Lahore Whites. I bowled a brilliant over against some top-quality batsmen such as Sami Aslam and Aamer Yamin and conceded just 10 runs and we were able to win by 1 run. This was an amazing performance and also one that I enjoyed immensely. Of course, later on in this tournament, I played an innings of 68* against FATA which is also a performance I will remember for a long time.

PakPassion.net: What do you feel about some negative comments regarding the quality of pitches in domestic cricket this season?

Hussain Talat: On the contrary, I feel that pitches this season have been very good compared to those in previous ones. It is possible that the prevailing weather conditions had an effect on how helpful the surfaces were for bowlers, especially during morning sessions where there was some moisture. Overall, the average runs scored in National T20 games were around the 170 mark with six scores of 200+. In the Pakistan Cup (50 Overs) tournament, the average team scores were close to 290 with nine scores of 300+ out of a total of 21 innings played during the tournament. To me this shows that the quality of pitches was good, at least for the shorter-format games.


PakPassion.net: How true is the general impression that you have bowled less overs this season?

Hussain Talat: I believe what one can say is that I have been given less opportunities to bowl. In the National T20 Cup, I bowled in 7 innings out of the 8 matches I played for Lahore Blues but my economy rate of 8.4 was acceptable and I was able to put in some match winning performances such as the one I mentioned where I defended 12 runs in the final over against Lahore Whites. Looking ahead, I am really looking forward to playing for Islamabad United in the next edition of the PSL and am hoping that unlike 2017, this year I will be given more chances to perform with the ball.


PakPassion.net: Do you have ambitions to be considered as a batting all-rounder and what batting position do you prefer to bat on?

Hussain Talat: I am convinced that I can perform an important role for my side as a batting all-rounder who can hold his own as a proper batsman in the top order. Normally, an all-rounder is one that is expected to come in at the 6th or 7th batting position and one who can help out with bowling duties as well. What I wish to do is to become an all-rounder who plays in the top-order, and to perform a role which is very similar to what Jacques Kallis and Shane Watson did for their teams. Even Abdul Razzaq played up the order at the start of his career so there are a few examples of some great all-rounders that I have and I wish to emulate in my career. I have had good experience as an opening batsman in One-Day games and in Twenty20 games I have played from the 3rd to the 7th batting positions. However, my aim is to establish myself in any side as a proper recognised batsman who can play in the 4th or 5th batting position for his team. If you look at my scores in the One-Day cup for regions where I played for FATA, you will see that I was the second highest run-getter in the tournament. I scored 319 runs in 5 matches with 2 hundreds and one fifty to my name where I sometimes played at the number 3 or 4 positions. Recently, in the National T20 Cup I played at the number 4 position and ended up with an average of 56. I have just ended my stint at the National One-Day Cup with an average of 69.50 mostly batting at number 4 and 5 positions which really shows what I am capable of if given chances to bat up the order.


PakPassion.net: Do you feel you are close to being called for national duties?

Hussain Talat: I am absolutely in good shape to join the national side if I am selected. I had some near misses in that I was called in for the squad of 30 players for the tour of West Indies in 2017 but not selected for the final 15 players announced for the tour. Also that year, I was part of the Pakistan U23 squad which took part in the ACC U-23 Emerging Cup in Bangladesh where I made 104 runs in four innings. My score of 57* against Bangladesh was the highlight of that tournament for me as was my performance in the semi-final against Afghanistan where I scored 37 as an opener and then took 2 wickets as an opening bowler. In my opinion, given that I have been able to bat so well at the top order and also been asked to bowl at the top of the innings, I feel that I am fit and ready to take the next step up and play for Pakistan.


PakPassion.net: Are there any specific areas of improvement which you are targeting in the future?

Hussain Talat: It doesn’t matter how experienced you are, one is always learning in this game. What I wish to do now is to gain more maturity in my mental approach and also in my game before I get into the Pakistan side. It really doesn’t matter how late I get a chance to play for Pakistan. The most important thing is to improve my game so much that whenever I am selected for the national side, I am able to establish myself in a permanent position and am not just a one or two game or series wonder. In terms of improvements, I am concentrating on improving myself in strike rotation which is an important aspect in any international cricketer’s game as is the power-hitting ability. As a bowler, I need to bring more variations into my arsenal. So, these are just examples of what I need to do to make sure that my game is as strong as possible before I start playing for Pakistan in the future.


PakPassion.net: Can you give us your take on Usman Salahuddin’s controversial run-out in which you were involved?

Hussain Talat: One of the issues in this whole controversy is that there is no clear camera footage of the incident, so people cannot tell what really happened from recordings or pictures. The decision was ultimately that of the umpire and I wasn’t even looking at the stumps at that point. What seems to have happened is that Usman Salahuddin was literally strolling towards the crease and that is what I saw when I picked up the ball. I then hit the stumps and then appealed for a run-out and the umpire judged him as out. The batsman did complain to the umpires and to our captain, Mohammad Hafeez but the umpires were both of the opinion that this was the right decision. They said that the batsman was not in his crease when the ball hit the stumps and that’s all there is to it. It seems that an attempt was made to make this into a huge controversy, but the fact of the matter is that this was a simple case of a batsman not making his ground and the fielder throwing the ball at the stumps. The umpire’s decision is based on what he saw and the fielder cannot be blamed as it's his right to appeal for a dismissal.


PakPassion.net: How was your association with Wasim Akram at Islamabad United?

Hussain Talat: I had a wonderful time working with Wasim Akram. He is a legend of the game and to be able to speak to and learn from him during his time at Islamabad United was simply awesome. He was with us for two years and that was a time when I learnt a lot about the game itself and also specific things like maintaining one’s fitness.


PakPassion.net: You must be looking forward to working with Waqar Younis who has recently been appointed as the new bowling coach for Islamabad United?

Hussain Talat: Obviously, having the other 'W' from the legendary combination of fast-bowlers is a great opportunity for me to learn and improve my bowling. I am very excited about this chance to work with Waqar Younis and learn about fast-bowling. In particular, in his days he was an expert in bowling yorkers and he could also bowl at searing pace which is the kind of knowledge I am really excited about picking up from one of Pakistan’s greatest bowlers.
Discuss!