"I am hoping that PSL 3 will unearth another two players for Pakistan" : Mickey Arthur

From the highs of their fantastic victory in the Champions Trophy to the lows of an abysmal 5-0 loss in ODI series to New Zealand, Head Coach Mickey Arthur has now experienced the full gamut of emotions associated with Pakistan's recent form in Limited Overs Cricket. Currently taking part in the Pakistan Super League as the Head Coach for Karachi Kings, Mickey Arthur is on a mission to discover fresh young talent as Pakistan look to build a world-beating squad for the 2019 World Cup.

In an exclusive interview with PakPassion.net, Mickey Arthur spoke on a variety of topics including Babar Azam and Hasan Ali's progress, Sarfaraz Ahmed's suitability as captain for all 3 formats of the game, why a limit needs to be placed on Pakistan players' participation in Twenty20 leagues and his hopes that Karachi Kings will play the final of the PSL in Karachi in March. 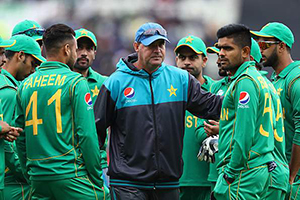 PakPassion.net: Are you satisfied with Babar Azam’s progress so far?

Mickey Arthur: Babar is a fantastic player and there is no getting away from that. I believe that he is a very, very good cricketer who has risen to the number one rank in Twenty20 cricket and holds the number 4 position in ODIs. But, he is learning all the time and we must not forget that he is still a young man and outside the conditions that he is familiar with, he is still learning the ropes and I am sure he will become even better. What I would like to see now is Babar progressing in Test cricket and to score a lot more runs in that format. Regardless of that, I am very happy with his progression in Test cricket and I think he is an outstanding player and will be a very good player for a very long time for Pakistan cricket.


PakPassion.net: Can Hasan Ali perform in Test cricket in the same way he’s done in LOIs?

Mickey Arthur: Yes, I do think he will improve in Test matches. I believe that he will get better and better and is definitely an outstanding player for us. As he gets more experienced in different conditions, his cricket will get better and I have absolutely no problem with his progress so far.


PakPassion.net: How do you feel Sarfaraz Ahmed is coping with the pressures of captaining in all 3 formats?

Mickey Arthur: I think he will be fine with captaining Pakistan in the three formats. He is a captain who leads by example which is very good. What we have to do now is to manage Sarfaraz through the tours so that when the going gets tough, we will need to try and find him a time where we can give him a little bit of a break. But, as I said, Sarfaraz can handle captaincy in all three formats without a problem and go from strength to strength as a captain.

PakPassion.net: How quickly can we find replacements for Younis Khan and Misbah-ul-Haq?

Mickey Arthur: It’s a fact that we need to find batsmen to replace Younis and Misbah but it's not that easy a task. How can we find a replacement for 15,000 Test runs just like that? We have Asad Shafiq and also Azhar Ali who is an outstanding player and one of the best batsmen in Test cricket at the moment. What we need now are more guys who can do the job for us in the same way as Misbah and Younis did before. So, we need a dependable batsman to open for us and certainly need a good number 3 batsman and someone to bat well at number 4 too. Haris Sohail made some great strides during the series against Sri Lanka. I have a lot of faith in Haris Sohail’s ability and I think he will come through exceptionally well in Test cricket. And of course, there are other batsmen on the fringes that we will keep on working with and hopefully, they can take over that mantle left by the departure of Younis and Misbah.


PakPassion.net: How are you looking to tackle the issue of a lack of a good second spinner in Tests?

Mickey Arthur: We have some good left-arm spinners in mind such as Mohammad Asghar. We also have Mohammad Nawaz and then there is Bilal Asif who bowls off-spin and of course, we have Shadab Khan as well and so, I feel we have enough spinners to play two spinners when we feel we have a need to do so. I am convinced that we are comfortably covered in that department.


PakPassion.net: Were there any issues between Mohammad Hafeez and yourself during the tour of New Zealand?

Mickey Arthur: There is absolutely no truth to that news at all. I really hate it when false news is reported about the team. The fact is that Hafeez and I had a great chat where I explained that to bring some new players through, we need to expose them at different times and situations. Hafeez is a wonderful player and has been for a while. But he knows that he has got to be bowling to nail his place in the team. When he is bowling and batting, he gives us that excellent advantage and that is what we have had our conversation about. He knows what he has to do and there are absolutely no issues between Hafeez and I at all.


PakPassion.net: Were Pakistan under-prepared when they embarked upon the tour of New Zealand?

Mickey Arthur: It’s not in essence the preparation for that tour that I have an issue with. What I have problems with is about managing our players and their workloads. Let me tell you why that is. Basically, I did a comparison between the workloads of Hasan Ali and Trent Boult. What I realised is that our players simply haven’t had a break at all. Our bowlers generally went from the Champions Trophy to domestic competitions to the World XI visit and then the series against Sri Lanka and then over to New Zealand.

In Hasan’s case after the Champions Trophy, he’s gone from CPL, World XI visit, series against Sri Lanka, Pakistan domestic cricket, BPL, T10 League and then on to New Zealand. It's plain to see as in the case of Hasan Ali that our players were fatigued. What my support staff and I have to do now is to find time when we can rest players and rotate them between series. All this has to be done because we are taking the next ICC World Cup in 2019 very seriously. We have to make sure that our preparations are 100 percent spot on for that. If achieving that objective means that we have to rest players at times so that they can be ready for the World Cup, then that’s what we will have to do. If that means that the players will end up missing one or two Twenty20 League tournaments for achieving the ultimate goal of helping Pakistan win the World Cup, then so be it. We will put in those restrictions, if we feel that they are in the players and Pakistan cricket’s best interests.

What we also need for our support staff leading up to the World Cup is a period where we will condition our players and work with them on technical matters. What we saw recently was that because the players had played so much cricket they were fatigued, and they had pretty much disintegrated. As they were so tired, they came back to us after the Sri Lanka series in bad shape. The fitness markers we have don’t lie. They showed us that the players weren’t as fit when they joined us again. That then took us 3 weeks to get players back up to speed physically and technically, and those 3 weeks basically cost us the ODI series which is something I was very disappointed about.


PakPassion.net: How important a role has PSL played in the development of talent for Pakistan?

Mickey Arthur: I feel that the PSL has been wonderful in developing talent. The first edition of the PSL unearthed Hasan Ali whilst the second edition brought to light the talent of Shadab Khan. I am hoping that PSL 3 will unearth another 2 players of talent for Pakistan and that will complete the jigsaw for our 2019 World Cup squad. So, I am looking for 2 players in this PSL to stand up and be part of our future. What I would like the new players to be able to do are two things that will get them to play for Pakistan. They cannot be good in just one discipline so if you are a bowler, you have got to be fielding properly. Similarly, if you are a batsman, you have to be good in the field as well. That is how we win games. So, players that aren’t good in the field will have to battle very hard to get into the team as they won’t fit into the brand of cricket we are looking for.


PakPassion.net: So, being at the PSL yourself would help in identifying such players?

Mickey Arthur: Of course, it is and that is the benefit of me coaching the Karachi Kings. In this way, I can get to see so many young players close at hand and I am able to witness Pakistan’s best young domestic cricketers in action. This will allow me to check if they are suitable for playing at the international level or not. That to me is the benefit of coaching at the PSL which is great and obviously something that I need to do.


PakPassion.net: Are you looking forward to a big improvement in the Karachi Kings’ fortunes in this PSL?

Mickey Arthur: Well, they say don’t count your chickens before they are hatched, but with the final in Karachi it seems that the Karachi Kings have to play in it so that does put a little bit of pressure on us. But I would say that we have the team for it and we can play in that final in Karachi. If we play well, then we can do it. What I will add is that the beauty of the PSL is in the fact that it's an unbelievably strong competition and if you let your guard down and don’t play well on one day, the other team will beat you, so we will need to be wary of that.


PakPassion.net: How will Imad Wasim fare in his first stint as captain in the PSL?

Mickey Arthur: I think he will be fine and he will do very well. Imad is aggressive and he leads from the front and doesn’t take a backward step and it will be interesting to see how he does tactically. But, I have got full confidence that he will be able to do that and end up doing well for us as skipper.
Discuss!