"I've no regrets about the Kolpak move" : Colin Ingram

Part of Karachi Kings' impressive Pakistan Super League 2018 squad, the 32-year-old T20 specialist Colin Ingram is expected to play a pivotal role in the middle-order if the team is to make it all the way to the final of the ongoing tournament.

In an exclusive interview with PakPassion.net, Ingram spoke about his impressions of Imad Wasim's captaincy at Karachi Kings, working with Mickey Arthur, Babar Azam's impressive batting talent, having no regrets of leaving South Africa to play as a Kolpak player and why he believes that the standard of cricket in the PSL is comparable to many of the other T20 leagues around the world. 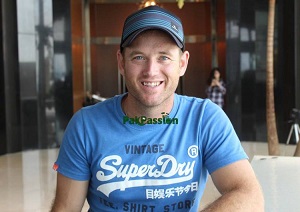 By Amir Husain (4th March, 2018)
PakPassion.net: How do you rate Imad Wasim as Karachi Kings' captain?

Colin Ingram: Imad has been an excellent captain for the team and to be honest, I am surprised that this is his first stint as captain in the PSL. He has handled himself really well and has immersed himself in his team and especially with all the different players from the first week of training since we all got here in the UAE. He is a passionate sort of a person and he is leading Karachi Kings in that way which is really encouraging and so I hope, long may it continue. He is always open to suggestions which is a mark of a good captain and I am really enjoying working with him. As someone who is coming from the outside, I have given him ideas and told him that he doesn’t have to use those ideas and he should trust his own gut feelings and make the call himself. But, I like giving him information and I see that he is happy to receive such suggestions from me as well as from some other experienced guys like Shahid Afridi and Ravi Bopara.


PakPassion.net: What has it been like to work with Mickey Arthur?

Colin Ingram: It's been a great and positive experience working with Mickey Arthur and the effect of his coaching can be seen in our players’ performances already. It's always nice to have a coach who has already worked with the local players and Mickey Arthur has already been doing an outstanding job with the Pakistan national side. You can see that he really works well with those guys and they really respect him for that and he is getting the best out of them in this tournament. It's been fantastic working with Mickey and he has been very welcoming towards myself which is excellent.


PakPassion.net: What does the presence of Shahid Afridi mean for the team?

Colin Ingram: I have played a lot against Shahid Afridi internationally and also in County Cricket against Hampshire in England. To finally play alongside him has been a fantastic experience although to be honest, I was quite nervous when I met him here for the first time as he is such a big personality. But, what I saw was a person who always has a smile on his face and is a wholehearted cricketer. Having him in the team is absolutely great for our team. To have a big-name player like him in our midst and just his presence also helps the team gel better.


PakPassion.net: What are your impressions of Mohammad Amir?

Colin Ingram: I played against him in England in the last County season when he was representing Essex and he was really impressive. I met him again recently and he welcomed me warmly to the team and we spoke about our lives and families which was very interesting. As far as the cricket is concerned, the ball’s been coming out of his hand very nicely in this tournament and I do hope that his injury is not too serious and I feel he will be a big part of the team in our PSL 2018 campaign.


PakPassion.net: How impressed are you with Babar Azam’s talent as a batsman?

Colin Ingram: Babar is not only rated highly in Pakistan and in the PSL, but he is also rated highly in the ICC’s rankings where he is currently at number 4 in ODIs and at number 3 in T20I rankings. He is a lovely character to have around in the team and to top it all, he is very level headed. One of his shots in the recent games where he timed it exquisitely past point really is a fine example of his skills and shows the type of excellent talent he has.

PakPassion.net: Do you have any regrets about the Kolpak move?

Colin Ingram: I definitely do not have any regrets about the Kolpak move and it was just the next step for me in my cricketing journey. I suppose I just needed to get out and play in a different environment and in a sense, rejuvenate my cricket career again. I have been fortunate enough to have this opportunity and one should not live with too many regrets about decisions of the past. I keep on looking for more opportunities and coming to play in the PSL is of course an honour and yet another way to show my skills. At the moment, I am focusing on what’s ahead of me and what I need to do to learn more. My game has definitely benefited from playing in new environments and I am thoroughly enjoying my cricket at the moment which is important.


PakPassion.net: Is the future bright for the concept of Twenty20 leagues?

Colin Ingram: This really is my first season in which I am playing Twenty20 cricket in tournaments such as the PSL and this new experience has been fantastic. The future of Twenty20 Leagues is massive as we see the huge following for such events around the world. Before I came over to play in the PSL, I was playing in the Big Bash for the Adelaide Strikers and we saw crowds of around 40,000 watching games which was amazing. In the subcontinent, the massive following on television and the broadcast deals associated with such tournaments show that there is big interest in franchise-based Twenty20 cricket and this is set to continue in the future as well.


PakPassion.net: How does the standard of PSL compare with other leagues around the world?

Colin Ingram: I feel that the standard of the PSL is right up there with the best leagues around the world. There are some really skilled bowlers with quite a few left-arm seamers which is quite exciting for Pakistan cricket. Of course, we then have some excellent spinners some of whom we have already seen do well in the games so far at the PSL. Add to that some seasoned campaigners in terms of the international players and you have a high standard of cricket guaranteed for the PSL. To me the level of cricket is fantastic, and I am sure it will be an exciting tournament.


PakPassion.net: Can the Karachi Kings go all the way in the PSL and qualify for the final?

Colin Ingram: I am hopeful that we will be able to go all the way to the final. We’ve had a brilliant start to the tournament and then there is the thought of playing in the final in Karachi. That is a nice end-goal for the team to work towards. If that does happen, it will be brilliant for the team, the owners and most importantly for the people of Karachi. That is a nice little carrot dangling at the end of the string, but we know that to get there, we will need to play some exceptional cricket throughout the tournament. Everyone at Karachi Kings is very excited about that and we are looking forward to the rest of the tournament. If we do get to the final, I will be travelling with the rest of the squad for a historic game in Karachi.
Discuss!