"Quite a few youngsters in the PSL who have the potential to become world-class players" : Imran Tahir

With 253 wickets in 141 international appearances for South Africa, Imran Tahir is regarded as one of his countries top spin bowlers. Its perhaps that reputation which lead the newest franchise in the PSL, Multan Sultans to include him in their line-up and the spinner has rewarded his employers by becoming the leading wicket taker in the tournament.

In an exclusive interview with PakPassion.net, Imran Tahir spoke about his experience of playing in the PSL, working with Wasim Akram and Tom Moody, and what he expects to achieve by playing in the tournament. 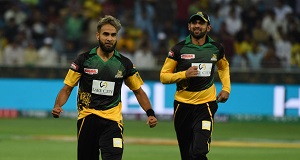 By Amir Husain (19th March, 2018)
PakPassion.net: How has your experience of the Pakistan Super League been so far?

Imran Tahir: This is the first time I am playing in the Pakistan Super League and I feel that the standard of this tournament is outstanding which is why it is not that easy to perform well in this league due to the quality of competition. Regardless of how tough it maybe to perform in the PSL, my job is to do well for Multan Sultans which is what I am focussed on doing at the moment.


PakPassion.net: Do you feel that the Multan Sultan squad is a balanced one?

Imran Tahir: I believe we have an excellent and balanced squad. There is just the right balance of senior players and juniors in the squad. Another good point of having such a combination is that the younger players also have a great chance to learn from the more experienced cricketers in the squad. There is a lot of hope in the camp and also a conviction that we will continue to do well with this squad in our first year. Our start in the PSL has been great and we will look to keep on repeating these performances in the future as well.


PakPassion.net: How does it feel to be working with the likes of Wasim Akram and Tom Moody?

Imran Tahir: It's an absolute pleasure working with such big names of international cricket. When I was a youngster, it was my wish to meet a legend like Wasim Akram. Whilst I have met him before in recent times, to be able to work with him is a dream come true and I am really proud about this. Both Wasim Akram and Tom Moody, apart from having been top-level cricketers are also great to work with. What I really appreciate is the manner in which they have welcomed me to the team as well as the respect that they have shown to me on joining Multan Sultans. It is my hope that I am able to fulfil and answer in kind the faith that both have shown in my skills and deliver for my team during this tournament.


PakPassion.net: How important is the PSL for the development of Pakistan cricket and its cricketers?

Imran Tahir: A league such as the PSL is crucial for any country and especially for Pakistan as it allows their youngsters an opportunity to improve their skills. They can do this as they get a chance of playing alongside international cricket stars and if they can perform well in the PSL, then the doors for selection for international cricket can also open for them. This is a unique chance for them as this sort of opportunity did not exist before at least in my time in Pakistan. What the PSL provides now is a systematic and proper way for young talent to be judged and then to be given a chance to represent Pakistan.


PakPassion.net: Do you see any room for improvement in the PSL?

Imran Tahir: I have absolutely no complaints about the quality of arrangement for this tournament. From what I see, this is an excellent tournament with great facilities and grounds which are of a high standard.

PakPassion.net: Do you see Multan Sultans going all the way to the final?

Imran Tahir: Of course, our team is working towards the goal of winning the competition but then we must also accept that all participating teams consist of excellent and world-class players who all have the ability to take their teams to the top. As a professional, I always believe that one has to give respect to the opposition or else this can cost you dearly so I won't make any bold predictions now. What we need to do is to focus on the matches ahead and continue to win the games. If we win enough games, then we would have earned the right to go all the way to the top and play in the final. The fact is that if we need to be recognised as the top side in this tournament, then we will have to work hard to achieve that goal – there are no two ways about it.


PakPassion.net: What will it be like if you have the opportunity to play the eliminators in Lahore and the final in Karachi?

Imran Tahir: It would be an amazing feeling if we do qualify and get to play in Pakistan. I still have many friends in Karachi and it will be a great honour to play in front of them and show them what I am capable of which is something I have not been able to do before. I have played in Lahore where I was representing the World XI. That trip was like a dream come true for me. I had always wanted to play in the Gaddafi Stadium in front of all of the cricket-crazy fans and my family and I were overjoyed when that happened. Hopefully, I will get another chance to play in Lahore again as well.


PakPassion.net: Do you see any talented young Pakistan players in the PSL who have the potential to become big names later?

Imran Tahir: There are quite a few youngsters in the PSL who have the potential to become world-class players later. The PSL is an arena and the perfect place for them to become even better players. When they play against the world’s top-class players, then they will gain a lot of experience. That knowledge, in turn, will probably make the transition to international cricket easier for them at a later time.


PakPassion.net: What do you expect to achieve from participation in Twenty20 leagues around the world?

Imran Tahir: Twenty20 leagues offer a unique opportunity for any player to showcase their talent and also to learn something new. For example, I am not here for a holiday as Multan Sultans have immense trust in my abilities and I need to demonstrate through my bowling that I am keen and serious about my job. Taking wickets for myself isn’t the aim for me but doing well for my team is very important whichever tournament I am playing in. What I aim to do is to put in my full effort and if I succeed in that, then the team will be happy, and I will sleep well too.


PakPassion.net: What was the reason for South Africa’s recent below par performance in the Limited Overs games during the recent series against India?

Imran Tahir: There was no simple reason for South Africa’s defeats in the Limited Overs game. The series was an ideal opportunity for our youngsters to make a mark in the international scene as a few of our senior players were injured. For their part, India played really well and won both ODI and T20I series and for that we must appreciate their performances. Simply speaking, they played good cricket and so they deserved to win. Regardless of the result, this was a good chance for us to learn by playing a strong opposition like India and hopefully we have learnt some lessons which we can use for our benefit in the future.


PakPassion.net: Your wicket celebrations have become very famous and much talked-about. What goes on when you take a wicket?

Imran Tahir: I honestly don't know. I am a very passionate cricketer and when I take a wicket I just let go and I don't really know what happens. I guess it's joy, emotion and sheer relief at taking a wicket. I'm someone who has had to work very hard to get to where I am and had to wait a long time for success, so I savour every moment of my cricket career.


PakPassion.net: Twenty20 hat-tricks, wickets galore and recently showing off your six-pack, you seem to be getting better with age?

Imran Tahir: I always believe that hard work is the key. My advice to any young cricketer is to never think that they have made it and to always look to improve in terms of technique and fitness. I have had a tough path in cricket and I suggest to all cricketers to enjoy your cricket, but always be professional and honest to what is a great profession.
Discuss!