"I am a cricketer who wants to play Test cricket for England" : Jofra Archer

Regarded as one of the brightest pace-bowling prospects in world cricket, 22-year-old Jofra Archer recently represented Quetta Gladiators in the Pakistan Super League (2018). Born in Barbados, the youngster has now set his sights on representing England in international cricket, but faces a wait until the 2022-23 season to qualify. After impressing in the seventh season of the Big Bash League, he was signed by Quetta Gladiators as a replacement player for PSL 3 when Carlos Brathwaite pulled out due to national duty.

In an exclusive interview with PakPassion.net, Jofra Archer spoke about his experience of playing in the PSL alongside the likes of Kevin Pietersen and Shane Watson, Sir Vivian Richards as a mentor, his thoughts on being picked in the Indian Premier League auction and discussed his cricketing heroes. 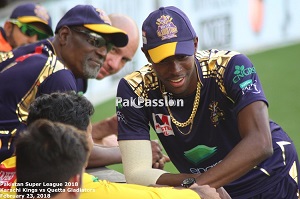 PakPassion.net: How does it feel to be amongst the most in-demand cricketers when it comes to Twenty20 leagues around the world?

Jofra Archer: It feels great. To get the chance to travel the world and get paid for something you enjoy doing is just a fantastic opportunity.


PakPassion.net: You were recently taking part in the Pakistan Super League, what did you make of that particular tournament?

Jofra Archer: It was my first year in the Pakistan Super League and whilst I was only there for a few matches, I really enjoyed the experience. I did not really know what to expect but soon realised that it's a very competitive league with some fantastic overseas players and local Pakistani cricketers taking part. There's no quarter given and the cricket is of a very high standard.


PakPassion.net: You played for Quetta Gladiators at the PSL, a squad which contained experienced cricketers such as Kevin Pietersen and Shane Watson. What was it like playing alongside such cricketers?

Jofra Archer: It was a great opportunity. They certainly weren't shy to share their knowledge and experience and to help their team-mates out. It was very encouraging for myself to get the chance to play alongside the likes of Kevin Pietersen and Shane Watson.


PakPassion.net: What sort of advice did Kevin Pietersen and Shane Watson give to you?

Jofra Archer: Well, Shane is a cricketer who has played all over the world so he was talking to me about playing in different countries and what to expect and what he had learnt about playing in different conditions and the skills needed to be able to perform in various parts of the world. With Kevin, he was talking more about backing myself in any situation and to always believe in myself and to always have faith in my own ability to succeed.


PakPassion.net: At Quetta Gladiators, you had Sir Vivian Richards as a mentor. He must have had some great advice for you?

Jofra Archer: He was very vocal around the dressing room and a very good person to have around especially for the younger players. When Viv talks, everyone listens and you just absorb and take in what he is saying. I mean Viv is the sort of man who everyone wants to talk to and learn from as such opportunities don't come around every day. He's particularly good with the younger players, guiding them, offering his suggestions to them, but at the same time allowing them to do what they think is best for them.


PakPassion.net: Your captain at Quetta Gladiators was Pakistan captain Sarfaraz Ahmed who has a reputation of being very vocal with the players. How was it to play under his captaincy at the PSL?

Jofra Archer: Before the PSL, I had heard that he is very vocal with the players but he wasn't like that. He was very calm under pressure and even when we lost a match he was fine. I think it's good to play under different captains as you learn from them in terms of what they are saying and thinking and I think it adds to your development as a cricketer also.

PakPassion.net: The Indian Premier League auction must have been a pleasant experience for you?

Jofra Archer: Yes, it certainly was. I was unsure whether I would even get picked for the IPL but those doubts were quickly settled and I'm glad to be joining the Rajasthan Royals who look as if they have a very strong squad with some excellent overseas signings and some very good local players. I think it will be a great experience for me playing in the IPL and one that I feel will help me improve further as a cricketer. I believe the key to playing in these Twenty20 tournaments is that you learn from the experience and take in what you are experiencing and use what you have learnt in future.


PakPassion.net: You've chosen England over the West Indies. Why choose England and was it a tough decision to make?

Jofra Archer: I think the conditions in England suit me and my bowling. I have a British passport which means that I can play County Cricket until I want to retire. So, having taken all that into account, it was a pretty easy decision to make for me.


PakPassion.net: What about cricketing heroes, who are yours?

Jofra Archer: My fast-bowling hero and the bowler that I want to emulate is Michael Holding, whilst my role-model is Chris Jordan. I loved the way Michael Holding ran into the crease, so quietly and with such grace and elegance and hence the nickname given to him which was 'whispering death'. Some people say that the way I run to the crease reminds them of Michael Holding which is a huge compliment for me. Holding is a legend and the sort of bowler that so many fast bowlers want to emulate and if I can be anywhere nearly as successful as he was, then I will retire a very satisfied man.


PakPassion.net: Recently Dale Steyn complimented you on social media. That must have been very satisfying for you?

Jofra Archer: It was very flattering. To receive compliments and to be rated so highly by one of the greatest bowlers ever is such a massive boost to my confidence. Dale Steyn is a bowler who I have admired and looked up to and to see that he is taking notice of my bowling and career so far is just inspiring for me.


PakPassion.net: You may be flavour of the month in Twenty20 leagues such as the IPL, but how important is County Cricket in your development going forward?

Jofra Archer: County Cricket is a great stepping stone and it's prepared me for where I am at the moment as a cricketer. It's competitive and it's a very good environment as well. County Cricket is a great place to learn and develop as a cricketer, as day in, day out, you are coming up against the world's best and that can only help you improve in all aspects of your game and in all formats.


PakPassion.net: You'll be working with Jason Gillespie at Sussex, that should also assist with your development as a bowler shouldn't it?


PakPassion.net: We have seen the likes of Adil Rashid and Alex Hales opt to only play white ball cricket. Is that something that you are looking to also possibly do in future?