"Those who have been against my progress have been a big motivator for me" : Umaid Asif

Initially ignored during the draft stage of the third edition of the PSL, 33-year-old fast bowler Umaid Asif was brought in as cover for Hasan Ali by Peshawar Zalmi. When Haris Sohail was later ruled out of the tournament due to injury, Umaid found a permanent place in the Zalmi squad and ended up with 13 wickets in 12 matches.

In an exclusive interview with PakPassion.net, Umaid Asif spoke about his journey in domestic cricket to his position as a key member of the Peshawar Zalmi side in PSL 2018, his views on Darren Sammy's captaincy, his role in Peshawar Zalmi's famous last-ball victory against Quetta Gladiators in Lahore, the thrill of taking part in the PSL final in Karachi and his aspirations of playing for Pakistan in the near future. 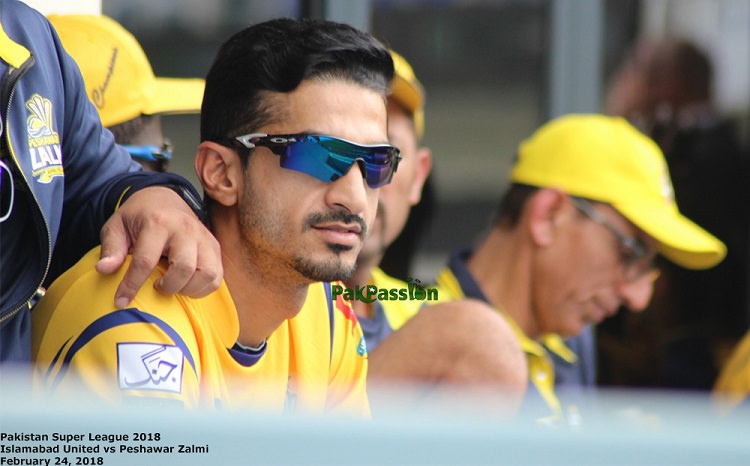 By Amir Husain (7th April, 2018)
PakPassion.net: You've had mixed success recently in domestic cricket, what do you feel is the reason for that?

Umaid Asif: I played for Lahore Whites during the 2016/17 season where I feel I bowled well but did not pick up as many wickets as I would have liked to. I did, however, work very hard that season during the Quaid-e-Azam Trophy where I claimed 22 wickets in 7 matches and also scored some runs too. I then played Grade 2 cricket for State Bank of Pakistan and also had a stint in England playing club cricket in Sheffield which went well. During this period, I worked very hard on my fitness and thankfully, I am now seeing the benefits of all those efforts.


PakPassion.net: How did it feel to be given the best all-rounder award in the 2017/18 Quaid-e-Azam Trophy?

Umaid Asif: To me, this was a dream come true as I had wanted to be the best all-rounder in domestic cricket and I achieved that goal with this award which was really the icing on the cake. What is now remaining for me is to represent Pakistan and to play in the national team. Let’s hope I can achieve that milestone in the near future.


PakPassion.net: How have you kept yourself motivated during the low points of your career?

PakPassion.net: How did you feel when you weren’t picked by any team in the PSL 2018 draft?

Umaid Asif: The truth of the matter is that my name wasn’t even in the list for the 2018 PSL draft which was very surprising for me as I had put in some good performances in domestic cricket at that point in time. I did not let the matter rest and went to the PCB offices to ask why that had happened and also met PSL officials for the same reason. Eventually, I was included in the draft list but when the draft did take place, I was not picked by any team. I did not give up even then and as fate would have it, the National T20 was about to begin and whilst I had missed the draft process for this tournament due to my commitments in England, I got a chance to play in this tournament as a replacement for some players who left to play in the BPL.

I did not disappoint my team or myself as I ended up as the best bowler in this tournament taking 14 wickets. My sights were now firmly on being picked as the additional 21st player for a PSL team but more disappointment was to follow for me as my name did not appear in that list. This was shocking for me as well as for many others who were very sure that I would be picked by one of the franchises for this additional spot in their squads. I did speak to one of the representatives for the Quetta Gladiators who told me that they would have picked me but could not do it, as they had to make amends for an earlier blunder when they had not picked a Balochistan player in their squad. However, they assured me that they would pick me for their squad next year. I suppose it was fate, but due to Hasan Ali’s injury, it was Peshawar Zalmi who took me on as a replacement and I was able to play in the PSL this year and also performed well in the tournament.


PakPassion.net: And then your place in the Peshawar Zalmi squad for PSL 2018 became a permanent one with Haris Sohail’s injury…

Umaid Asif: After the first 3 matches had been played in this year’s PSL, Hasan Ali was once again fit, and our captain Darren Sammy was very troubled by the fact that once Hasan was fit, I would not be able to take any further part in the tournament. It was unbelievable for him that I hadn’t been picked for the squad in the first place and he promised to talk to the management about this issue. It just so happened that Haris got injured and I was able to play in the team although to Sammy’s credit, he had said to me in our first net practice that ‘brother, you will do well for the team’. These are the types of things that motivate a player a lot and really make one work harder.


PakPassion.net: Tell us a bit more about Darren Sammy’s style of leadership?

Umaid Asif: We all know how good a captain Darren Sammy is, as he has lead his national team to 2 ICC titles. When it comes to his persona, it is unique and in terms of his leadership, to me it is similar to what probably Imran Khan’s style of captaincy must have been. He has the same positive attitude that we know Imran Khan had and as someone playing under this style of captaincy, you feel like always giving your hundred percent for the captain. Sammy never needlessly criticises or tells bowlers what to do, instead he always come over and asks what we need, to do our job better. If he sees something that is not going according to plan or if we are making a mistake, then he will point it out and then tell us how to fix the issue. I will add here that one of the best things about a tournament like PSL is that you are playing alongside legends as well as under the captaincy of legends as well which is crucial for an upcoming player like myself.


PakPassion.net: Do you feel that your career is a lesson for other cricketers to show them that they should not lose hope if they are struggling to make it to the highest level?

Umaid Asif: I believe the key to success in any field in life is to be persistent in your efforts. There will be many hurdles along the way, but you need to keep on going and moving on. I would really like to thank not only all the people who have stood by me through this journey, but also those who have been against my progress as that can be a big motivator. As the saying goes ‘what doesn’t kill you, makes you stronger’. My progress is simply a lesson in continuing to work hard when conditions and people are against you and in believing in one’s ability. When you do that, success will follow eventually.


PakPassion.net: Tell us a bit more about your role in that dramatic finish in the Eliminator game against Quetta Gladiators in Lahore?

Umaid Asif: That was an amazing end to a hard-fought game. I recall standing in the field and looking at the scoreboard to note that 3 runs were required by Quetta Gladiators to win the game. In a silent prayer, I begged the Almighty to ‘please don’t let me go home without playing the final of this tournament’. My focus at that point was to make sure that whatever happened, I would not allow 2 runs to be taken. Liam Dawson, who was bowling the final over had tried all kinds of deliveries but had been hit every ball in that last over. I was expecting him to bowl the final ball of the over as a full-length ball at Anwar Ali's legs which I felt would be hit towards either in the mid-off or long-on area and that I had to be ready to sprint and stop the runs.

Liam bowled somewhat of a full-toss and it was hit high in my direction at long-on, but I misjudged it as initially I thought that I would have do dive forward but the ball was further away from me and consequently, the ball fell on the ground. I immediately looked for the ball to make sure I could stop 2 runs. It is at this point that I almost felt that an angel from the heavens had descended and guided me to throw the ball in such an accurate way. Obviously, we practice throwing at the stumps, but this was a special situation where I had to turn around and throw the ball off balance. The throw went straight to the bowler and just near the bails and Liam’s presence of mind did the rest. I have to say that it’s still hard to believe what happened at that point and I get goosebumps whenever I now watch the video of this whole incident. I suppose what transpired was a result of mine and the team’s determination to not let the other team get those runs and win the game.


PakPassion.net: What was the atmosphere like in the PSL final in Karachi?

Umaid Asif: Even though we did not win the final of the PSL, we were all honoured to have taken part in the game in Karachi. The atmosphere in the stadium was electric and very difficult to describe in words. We as players have played many Twenty20 games and also participated in finals of tournaments but this match in Karachi was something truly special. One can say that the PSL final was a celebration of Pakistan cricket and a proud day for the nation as well. It felt like the festival of Eid had arrived in Karachi and Pakistan. Watching the Mexican-waves as well as feeling the roar of the crowd was amazing and it was heartening to see our people enjoying the game they love so much. It has to be said that playing cricket in one’s home ground cannot be matched in any way possible.


PakPassion.net: Your dream must be to play for Pakistan in the future?

Umaid Asif: To play for Pakistan has always been my dream. I have been working hard before but without sounding too full of myself, after my good performances in the PSL, I feel that I have reached that level which should allow me to be selected for the national level. I also did not feel that much pressure when playing in the PSL which is something a newcomer would have felt so that is another indicator of my suitability for top-level cricket. Pakistan's fitness trainer, Grant Luden, during the PSL told me in a joking manner that I didn’t have it in me to be fit for international level, but I told him I will come to the NCA and show him that I can do that. Jokes aside, the focus is on representing Pakistan and all my efforts are directed towards this goal. I feel that I have got to an important stage of my career and I hope that the Almighty will continue to bestow his mercy on me and take me to the next level in my cricket career also.
Discuss!