"I will always be grateful to Mickey Arthur for his faith in me" : Imad Wasim

Imad Wasim's 49 run innings to help his side keep their semi-final hopes alive during the recently concluded ICC World Cup 2019 was simply a reconfirmation of his status as a top-quality all-rounder for Pakistan. In 87 international appearances for his country, Imad has taken 80 wickets, scored 1127 runs and has an impressive T20I strike-rate of 152.03.

In an interview with Saj for TheCricketPaper, Imad spoke on a number of topics including his ongoing stint with Nottinghamshire to play in the T20 Blast tournament, why he is saddened by the departure of Mickey Arthur as Head Coach of Pakistan, improvements in his batting form and his views on captaincy for the national side. 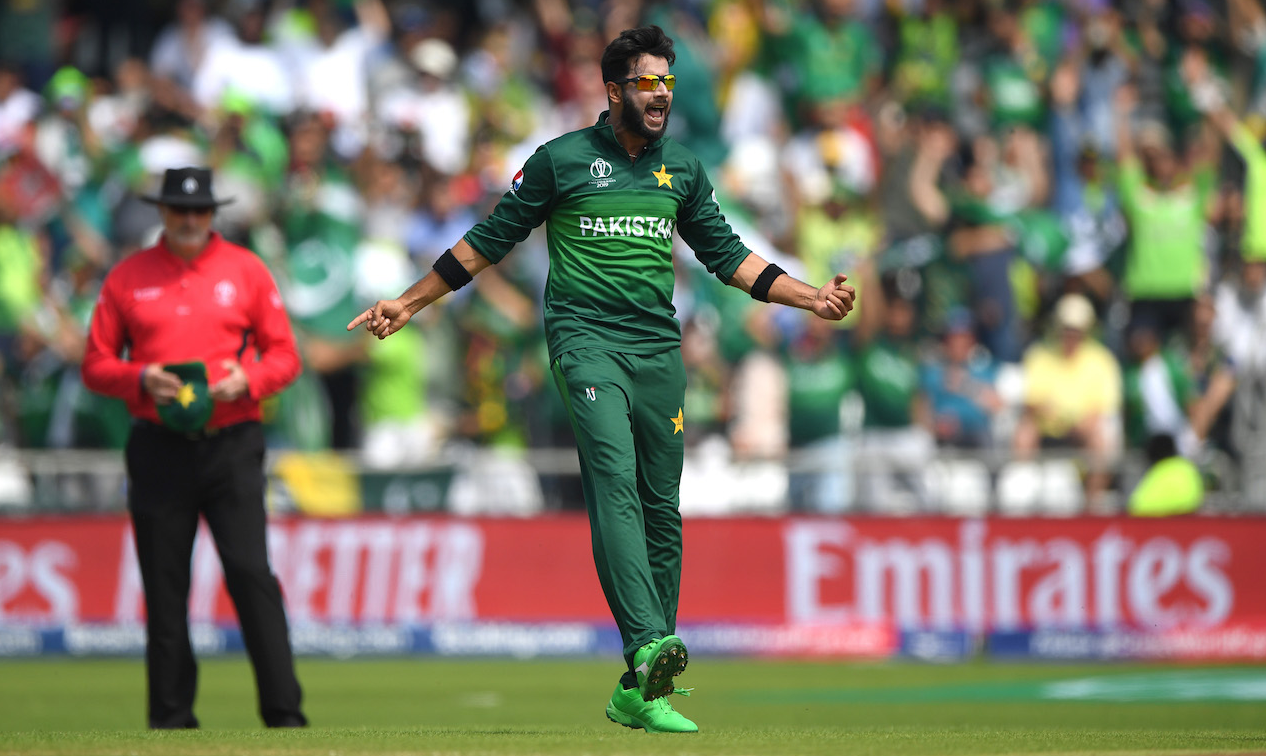 PakPassion.net: How would you compare the T20 Blast tournament with other Twenty20 tournaments you have participated in and what attracted you to play in it?

Imad Wasim: I feel that the T20 Blast is an excellent tournament and the games played there are of a good standard. The level of competition is very good but for me the greatest attraction of playing in the T20 Blast is that it allows me to experience county cricket in England. In this way, I get to learn about a different culture and also to get used to different playing conditions. Playing here also allows me to interact with players from England and other countries which is always a great experience.


PakPassion.net: How do you rate Nottinghamshire as a team and how well have you adjusted to playing there?

Imad Wasim: Nottinghamshire are a good side with some very exciting young players who I feel have the ability to one day play for England as well. Players such as Joe Clarke, Tom Moores and Matthew Carter are ones that I feel will soon represent England if they work hard and play to their potential. Of course, they also have Alex Hales who without any doubt is a world-class player and a top cricketer and I do hope he will be back in England colours very soon. All in all, I have been with Nottinghamshire side for about a month now and have found the lads to be very friendly and cooperative and I am thoroughly enjoying my time with them.


PakPassion.net: How impressed have you been with Alex Hales?

Imad Wasim: Absolutely, he is one of the best players I have had the pleasure to play with. He and I played together in the T10 League for Maratha Arabians and he has really impressed me with his batting and style of play. I feel that it’s just a matter of time before we see him back playing for England.


PakPassion.net: How do you feel about the departure of Mickey Arthur as Pakistan Head Coach?

Imad Wasim: Undoubtedly, it’s sad to see Mickey Arthur leave the role of Head Coach but that is a decision which the PCB has made. I do hope that I will have another chance to work with Mickey in the future perhaps at some sort of domestic or league level. Mickey did well for the Pakistan side but that is a decision by the PCB to not renew his contract and we must all respect and abide by it as that is how it is.


PakPassion.net: What were your impressions of Mickey Arthur as a coach and how did he help you develop as a player?

Imad Wasim: The fact that Mickey kept faith in my abilities is something that I will always cherish about his time as Head Coach for Pakistan. He kept on playing me in the side and any cricketer if shown such belief, will eventually come good and I feel that this is how it turned out for me. He helped me immensely with my cricket and worked very hard on my batting skills. I got along very well with him and will always be grateful to him for his faith in me and his insistence on keeping me in the side.


PakPassion.net: Should the next Head Coach for Pakistan be foreign or Pakistani?

Imad Wasim: To be honest as a player, it really does not matter who the Head Coach is as my job is to perform to the best of my abilities. Whoever takes over Mickey’s role will have my wholehearted support and I do wish him all the best. Regardless of where the coach is from, the key idea is for him to keep pushing Pakistan cricket in the right direction and as long as he does that, he would be the ideal person for the job.


PakPassion.net: What is behind the recent improvement in your batting performances?

Imad Wasim: After my comeback from injury in 2018, I worked hard on my batting which I always rated. I felt that if I could take more responsibility with the bat, I would do better as a batsman. I also started to ensure that I would stay to the end and was there to finish the game and the results started to show as they did in the Afghanistan game. So, after my comeback, I have averaged 51 with a strike rate of about 120 which shows that my batting has improved and that obviously pleases me a lot. The fact is that I am not a big-hitter of the ball but what I am concentrating on is being a good manipulator of a cricket ball and also ensuring that I have a healthy strike-rate as well which is very important in the shorter forms of cricket. I do try and set the bowler up to make him bowl the way I would like him to bowl to me, and also think carefully about which ball to take my chances on and then execute my shots.


PakPassion.net: Many feel that you should be batting higher up the order, how do you respond to that suggestion?

Imad Wasim: The actual batting position doesn’t matter to me that much, as what really concerns me is to perform to the expectations of my team. If batting higher up the order is what is needed for me to do the job for the side, then I am more than happy to do that. But, I am totally flexible in this regard and my position in the batting order will always be based upon my team’s requirements which in turn is driven by the wishes of the captain and coach of the side.


PakPassion.net: Some feel you could be effective in Test cricket?

Imad Wasim: Test cricket is not something I would like to pursue as part of my career. Due to my history of injuries, I would rather just play white-ball cricket as I do not think I would be able to last the duration of a Test match. Playing white-ball cricket is the best option for me and will also allow me to extend my career longer and that way I can also serve Pakistan for a longer period of time.


PakPassion.net: Would you, then, sympathize with the likes of Mohammad Amir who no longer wish to play Test cricket?

Imad Wasim: In my view, Mohammad Amir’s decision to retire from Test cricket is a good one. There is a lot of white-ball cricket being played around the world and if Amir can play longer in white-ball formats then, he will also serve Pakistan for a longer time. This would be a better choice for Amir and Pakistan than him just playing a couple of seasons which include Tests and then retiring from the game early due to injuries.


PakPassion.net: Are you concerned that the Pakistan side is becoming no more than a glorified Twenty20 side?

Imad Wasim: I think the PCB have taken some impressive steps in the way they have designed the Central Contracts so as to handsomely compensate Test cricketers, ahead of players who are just good in white-ball cricket. This measure will surely attract young cricketers to take up Test cricket in preference to white-ball cricket. However, we have to remember that at the end of the day, playing any form of cricket is a personal choice. If anyone feels that they can better serve their side and also do better in white-ball cricket, then they should pursue that career path. Personally speaking, I prefer white-ball cricket as does Mohammad Amir but that is our choice although, what I would recommend and urge youngsters is to pursue playing Test cricket in preference to the limited-over versions.


PakPassion.net: The next edition of the Pakistan Super League being held in Pakistan is fantastic news isn't it?.

Imad Wasim: I will be honest here and say that I was over the moon when I came to know that there are concrete plans to hold the 2020 edition of the PSL in Pakistan. The fans in Pakistan are hungry for cricket and there is an unreal appetite for the game in the country. As a player I can say that it will be an awesome feeling to be playing in front of our home crowds as they will cheer for us all through the tournament. I cannot think of a better feeling than playing in front of thousands of fans on our home grounds and that is why I am very excited about the PSL being played in its entirety in Pakistan next year, God-Willing.


PakPassion.net: How important are Wasim Khan and the PCB’s efforts to restore international cricket to Pakistan?

Imad Wasim: I am very pleased to see the PCB MD and his staff working very hard to try and get foreign teams to visit and play series in Pakistan. For that, one must give immense credit to the PCB and if they succeed in restoring full tours to Pakistan then it will be a huge achievement for all of us. As a cricketer, there is nothing better than having the opportunity to play international cricket in front of our home crowds and no words can describe that feeling of elation. We must also thank the ICC as they have made a lot of efforts to try and make this happen and of course to the Pakistan government for their attention to this important matter.


PakPassion.net: Is captaincy of the Pakistan limited-overs teams something that you would consider if offered?

Imad Wasim: As a young cricketer, I have always wanted to play for Pakistan and being offered captaincy would be an honour for me. However, this is something for the PCB to decide and I would never go to them and ask for this position. To be clear, I will be happy to serve under any player that the PCB offers the captaincy to as all I am interested in is serving my country. My job is to play cricket and if I am given the responsibility to captain the side, it would be great as I have never backed down from a challenge, but if not, then just being a member of the team will be an honour in itself.
Discuss!