"I will leave no stone unturned in making myself worthy of national selection" : Azam Khan

With an aggressive batting style which many Pakistani fans feel is missing from the national side, batsman/wicket-keeper Azam Khan is well on his way to establishing himself as a force to be reckoned with in the shorter forms of the game. He also recently made his debut for Sindh in First-Class cricket and was named as the best wicket-keeper in the recently concluded Pakistan Cup.

In an exclusive interview with PakPassion.net, Azam spoke about the pressure of comparisons with his father Moin Khan, how he has answered his critics, his intentions to improve his fitness, the experience of playing the Pakistan Super League and his aspirations to represent Pakistan. 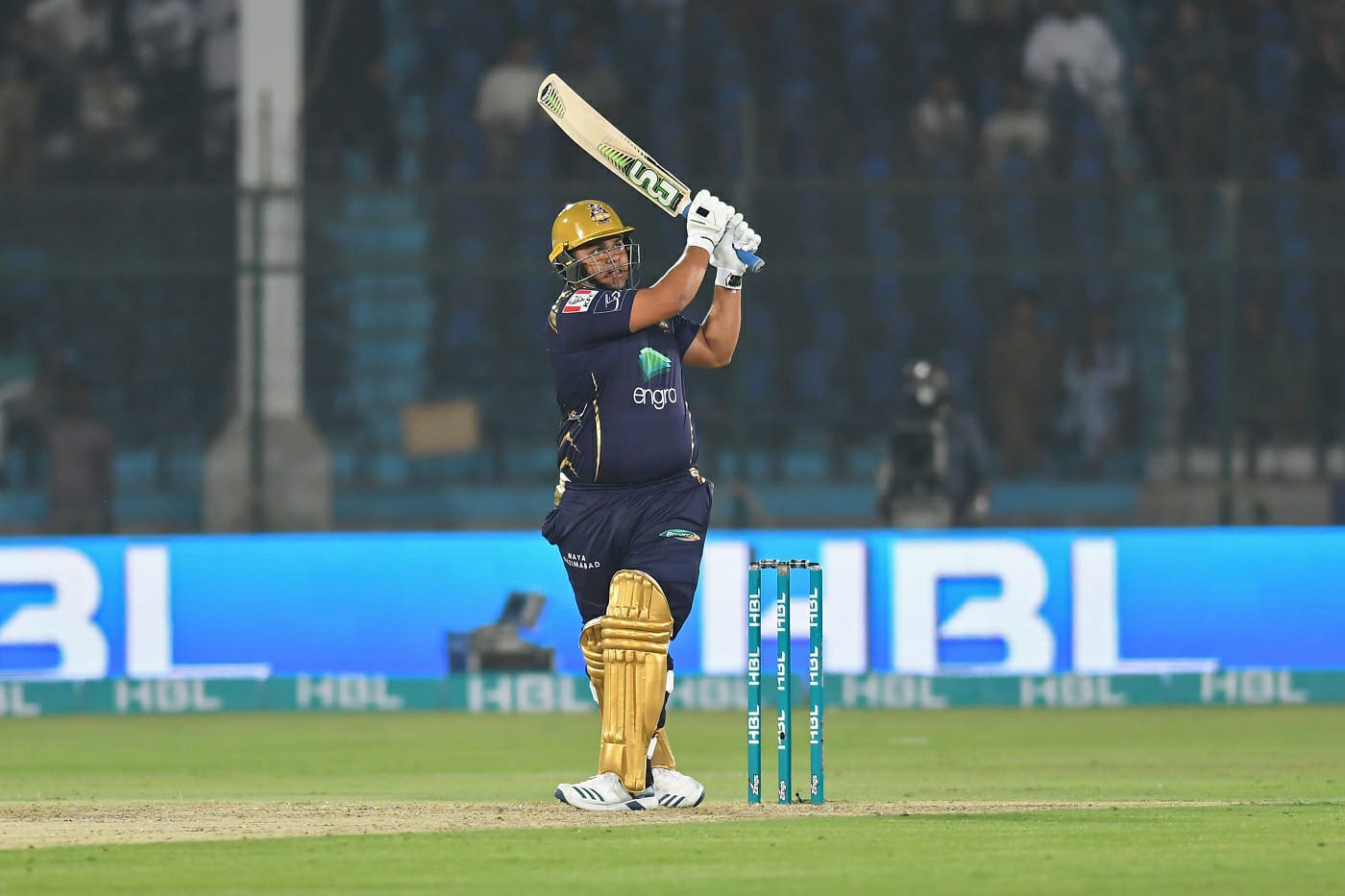 PakPassion.net: What is the attraction in T10 cricket and which brought you to the ongoing Abu Dhabi T10 tournament?

Azam Khan: This is the first time that I am playing in a T10 tournament and what interests me most about this format is that as a batsman, you have to be on top of your game not just physically but mentally as well. This is because you have to make quick decisions and do not have much time to settle in before you start playing your shots. So, it’s a tough format to play in but doing well in it does showcase your ability to think and act fast which can only benefit you as a batsman.

PakPassion.net: Do you think that playing in the T10 format may have a negative impact on the way you play in other formats?

Azam Khan: I do not think playing in any one format can affect your game in other formats. The reason is simply that whether you are playing Twenty20, One-Day or even red-ball cricket, you play according to the situation of the game and not based on how you feel like playing that day, or based upon the demands of a different format. In a sense, the format of the game you play in doesn’t matter because the idea is always to score runs and you can only do that when you have a full array of strokes in your armoury which one can develop only from playing in all formats of the game.

PakPassion.net: How difficult is it when people compare you in cricketing terms to your father?

Azam Khan: When it comes to skills and abilities, I cannot be compared to my father at all. He had a long and illustrious international career where he served his country with honour and I am just starting my life as a cricketer, so comparisons are of no use at this point. In fact, I don’t think I can ever be compared to my father in terms of cricketing abilities, nor will I ever compare myself to him. All I will say is that I cannot think of a prouder father than Moin Khan when he sees me perform well and I draw a lot of inspiration from that and hopefully will continue to perform well in the future.

PakPassion.net: What's the best piece of advice your father has given to you?

Azam Khan: The one piece of advice that he has given to me is about making sure I that I believe in the power of hard work to move forward in my life. He has also told me that the more hardships I overcome early in my career, the easier things will become for me in the future. The idea being that doing the hard yards now will help me face up to difficult situations in the future and that is advice I have taken to heart and am following religiously.

PakPassion.net: You were mocked for various reasons when you first came into cricket, do you feel you have quietened some of the critics with your performances?

Azam Khan: I really have no time nor the inclination to worry about what other people say or feel about me. Those are things I cannot control. What is in my control is the bat which is in my hand, and all my energies are focussed towards performing on the field. I know that the Almighty has given me the ability to play cricket and hopefully with good performances, I will gain more admirers than people who will speak ill of me and in the process, I will one day be able to serve my country as well.

PakPassion.net: You’ve clearly worked hard on your fitness, but do you believe there is still more work to be done on that front?

Azam Khan: I am not satisfied with my fitness at all and I intend to work more on it as that will help me perform better. The fact is that even though you may have all the right cricketing skills, it’s the right fitness level that really helps in polishing those skills. This is my goal and one that I am keen on achieving. For this to happen, some short-term plans have been setup for me by my coaches and I am following them.

PakPassion.net: How seriously do you take your wicket-keeping?

Azam Khan: I take my wicket-keeping very seriously and it’s a skill that I spend a lot of time practicing. I know that the ability to keep wickets in addition to my batting can give me an extra edge when it comes to helping out my team, so I do take it very seriously. I have been wicket-keeping in all junior formats and in my Under-19 days and for me this is a skill which I want to develop further and is a key part of my overall game.

PakPassion.net: You've played mainly white ball cricket, but recently made your First-Class debut as well. How important is playing in the red-ball format for you?

Azam Khan: The red-ball format is probably the best format for training and developing batsmen. And to be honest, it’s a very enjoyable form of cricket as it gives you the opportunity to play long innings and stay longer at the crease than you normally would. It also allows you to really improve your game as you look to improve the skills needed to stay longer at the wicket and also score runs along the way. My debut for Sindh this season was very enjoyable and I learnt a lot from playing in that format. Having only played T20 and One-Day cricket before, this experience of the 4-day game was very beneficial for me and hopefully, I can play a few more games for Sindh in the coming seasons which will really help me improve my game further.

PakPassion.net: What changes do you need to make to your game when you shift between different formats?

Azam Khan: To me all formats are important and my attitude to each format is pretty similar which is to play in an aggressive manner. I always try and play attacking cricket and love to take the game to the opposition bowlers. This has been my way of batting since I started playing cricket and to me, more than worrying about the form of cricket I am playing, it’s the run-scoring which is more important. Whilst each format has its own attraction, I will always approach the games with a similar strategy and in a sense, it doesn’t matter if I am playing Twenty20, One-Day or 4-Day cricket.

PakPassion.net: How important has the Pakistan Super League (PSL) been for your development?

Azam Khan: PSL is an important tournament not just for the players in Pakistan but it has given our cricket a new global platform which was lacking before 2016. This tournament is watched globally, and it’s become a well-recognized brand that is a matter of pride for all of us. This tournament has also given Pakistan some excellent players in the shape of such names as Shadab Khan and Faheem Ashraf. It’s a great place to showcase our talent and I was lucky to have been picked by Quetta Gladiators and to have played 9 games in the 2020 season. The experience of playing in front of knowledgeable and packed houses in Pakistan was very enjoyable and one that I will cherish forever. The pressure of playing in front of such a large audience can be tough and it does take a lot of will-power to keep yourself under check and to deliver for your side. I hope to play more in the PSL and to be able to entertain crowds in a tournament which has a special meaning for the people of our country.

PakPassion.net: What specific goals have you set yourself for the future?

Azam Khan: Obviously, my aim is to score as many runs as possible but what is most important for me is to work on my fitness as I know that this is an important part of any cricketer’s development. I weighed about 140 kgs last year and I have now reduced that to 108 kgs but the idea is to not stop there and further improve this aspect of my overall fitness.

PakPassion.net: It must be heartening for you to hear your name being mentioned for international duties?

Azam Khan: Of course, every player who plays cricket at a professional level dreams to one day play for his country. As for me, I would be humbled if I am ever selected to play for Pakistan but even if that doesn’t happen soon, I know that I have time on my side and my opportunity to represent my country will eventually come one day. Until that time, I will continue working hard and look to score more runs and perform well, and to make sure I leave no stone unturned in making myself worthy of selection for the national side.