In his latest blog on PakPassion.net Fazeer Mohammed writes about why the world should listen to the positive comments about restoration of international cricket in Pakistan by Michael Holding, examines the reasons why likes of Jofra Archer and Miguel Cummins have chosen to leave West Indies cricket and looks forward to positive outcomes from the appointment of Phil Simmons as Head Coach of the West Indies. 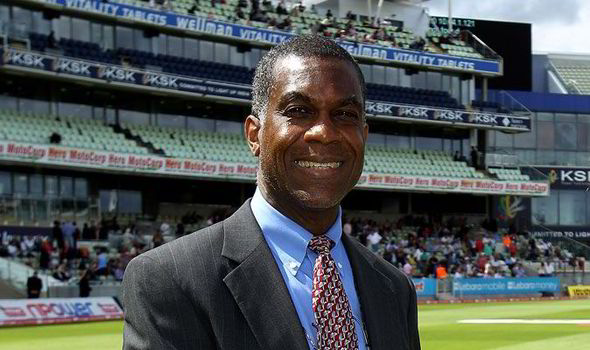 Michael Holding’s lethal impact with ball in hand during his fast bowling heyday has been matched, possibly even surpassed, by the authority and forthrightness of his views as a respected commentator and critic on the game for almost 30 years.

So for Pakistan to have the solid endorsement of such a respected voice in the continuing effort to return full-fledged international cricket to the country must be a huge step forward in a cause that has been gradually building momentum over the past couple years.

Holding’s mere presence in Pakistan, accompanied by Caribbean broadcaster Barry Wilkinson, for the One-Day International and T20 series against Sri Lanka over the past fortnight will send a clear message to full members of the International Cricket Council that brushing aside the issue of touring this cricket-crazy nation, on the pretext of security concerns, cannot continue as a matter of course.

It doesn’t mean that safety of players and fans will now become a back-burner issue. Far from it. No game of bat and ball can ever be prioritised over life and limb. So there can be no compromise there.

But more than ten years after the attack on the Sri Lankan team in Lahore, and with more teams – male and female – willing to play in Pakistan, Holding’s stated support cannot be ignored by those seeking any excuse to prolong the nation’s alienation, and more specifically the disenfranchisement of their tens of millions of loyal fans, from the global cricketing family.

Obviously it’s unlikely that the atmosphere at any Pakistan venue will be of the unrestrained, excessive variety for which the Caribbean Premier League has become known.

On this occasion the loss to the Barbados Tridents would have been even more agonising for the supporters from that South American nation has they had already made history in winning all ten league matches, plus a knockout fixture, only to stumble fatally when it seemed the title was in their grasp at last.

There is some consolation though in the exposure given to batsman Brandon King, a Jamaican who seems very much in the stylish mould of compatriot Marlon Samuels, and the burly Guyanese Romario Shepherd, a fast bowler and hard-hitting lower-order batsman whose parents were probably hoping he would follow in the illustrious footballing footsteps of the Brazilian World Cup-winning striker after whom he was named!

CPL has always been a showcase for new Caribbean talent. In the very first season in 2013 Nicholas Pooran made his mark as a 17-year-old and now that precocious talent is flowering on the international stage, as we saw at the World Cup in England. Apart from King and Shepherd, CPL 2019 has also thrown up the skill, enthusiasm and athleticism of Hayden Walsh Jr.

Selected as an understudy to Nepal’s Sandeep Lamichane, the Antigua-born leg-spinner claimed a tournament leading 22 wickets despite missing three matches and will surely make himself available now for West Indies selection after seeming at one stage to have put his lot in with the United States.

Of course there is no guarantee that any of these emerging stars of the just-concluded tournament will fulfil their potential in West Indies colours. That is always the challenge, and it will be interesting to see how this trio performs on the international stage, if given the opportunity sooner rather than later now that Phil Simmons has just been announced as the head coach of the senior men’s team on a four-year contract.

Simmons was controversially fired a year into his first coaching stint in 2016 but returns now with his reputation enhanced via his stint with Afghanistan. His earlier association with Ireland for eight years is credited with their advancement to a Test-playing nation. It remains to be seen though if the former West Indies all-rounder can be similarly effective in the fractious, divisive environment that is West Indies cricket.

Often it is a lack of opportunity which prompts players like Jofra Archer to switch allegiances and kick-start their international careers or those like Miguel Cummins, who have struggled to hold a regular spot in the West Indies team, to go the way of a Kolpak deal and essentially bring their West Indian representative prospects to an end.

No part of a blog, or an entire blog, can even begin to do justice to the complex series of circumstances which creates the environment where cricketers from the Caribbean, and especially Barbados (nicknamed in these parts “Little England” or “Bimshire”) are likely to seek their fortunes elsewhere.

It is a situation which can only be properly contextualised by understanding a history of slavery, indentured labour and hundreds of years of colonial occupation which contribute to a mindset and real opportunities where young men, and soon women no doubt, with historic familial ties to the United Kingdom will seek to exercise their options with England, especially if they feel slighted by selectors in their home territories. This has been the case for Archer, whose rare pace and hostility have already given his adopted team the edge to lift a World Cup trophy for the first time and to match Australia’s fire with even greater fire in the latest Ashes series.

Obviously it is being seen outside of the region as the big fish who got away. But there have been others who went that route over the decades, evidently without making such a sensational and instant impact.

Cricket West Indies CEO Johnny Grave, an Englishman, earlier this year described England’s courting of Archer as “poaching.” With their greater resources, more lucrative opportunities and historical connections, England will often be seen as the land of opportunity for the disillusioned young West Indian cricketer or the mature one who recognises his days of wearing the distinctive West Indies colours are over.

It is a reality West Indies cricket has had to come to terms with even as they seek to create an environment where young players see the regional team as their first option on the route to international fame and lucrative stardom.