A profile of Mohammad Amir Khan, another talented fast-bowler from the Khyber Pakhtunkhwa region who impressed for Pakistan in the Under-19 World Cup and went on to represent Peshawar Zalmi in PSL 2020. 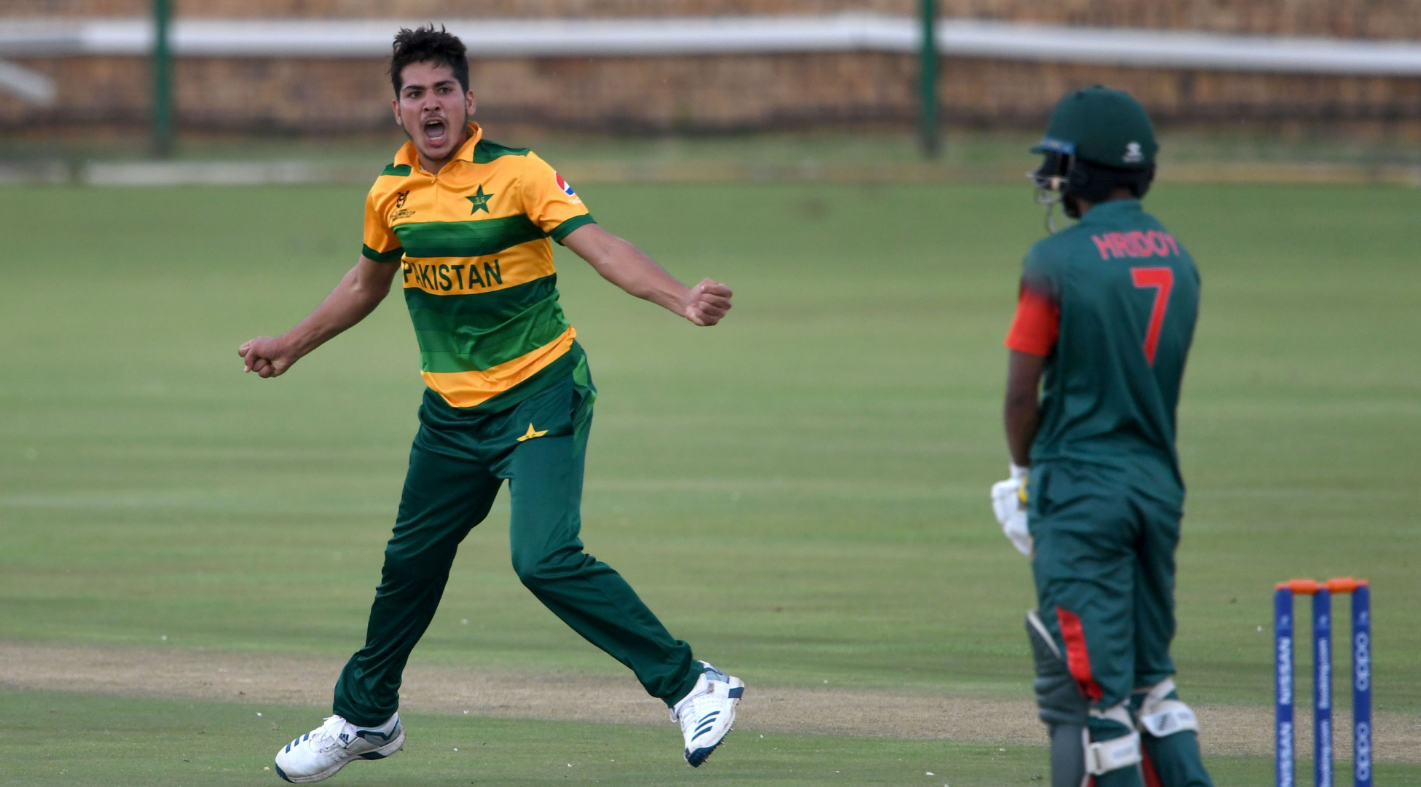 With the blessings of my parents, I started playing tape-ball cricket in the streets of my village as there aren’t proper cricket facilities in the Swat area where I believe we have just one good ground to play in. So, there was no option but to continue playing tape-ball cricket and hope for a chance to advance to hard-ball cricket at some district or regional level. Along the way, I also carried on my education to reach the final year of intermediate level.

With little chance of playing hard-ball cricket in my area except for a few games for my college, I decided to appear for District Under-19 trials but was told that I am under-age. So, I instead appeared for the District Under-16 trials and was picked for my district and then later was selected for the regional Under-16 side as well. For someone with very little hard-ball cricket experience, I did really well in my first major tournament playing for Peshawar Region when in the Regions PCB-PEPSI Stars Under-16 One Day Tournament in 2017/18, I took 12 wickets in six matches. Later, in April 2018, I was selected for the Under-16 tour of Australia but whilst I played just two matches in it without taking any wickets, the experience of touring a different country was very useful.

I only played two One-Day matches in 2018/19 Under-19 season but in 2019/20 season with the new domestic system in place, I got to play many more games and did reasonably well for the KPK side. In the National Under-19 Three Day Tournament 2019/20 I took 18 wickets in 5 matches. I also played in the Quaid-e-Azam Trophy 2nd XI 2019/20 taking 5 wickets in 3 matches which will hopefully help me move to the first XI in the next season.

I was one of 28 players asked to take part in the high-performance camp in November 2019 for Under-19 players in which I impressed the selectors by taking three wickets in a practice game. This performance helped in my selection for the South Africa bound Pakistan Under-19 World Cup squad. The tournament, despite a groin injury, was an excellent experience for me. I start off well with the warm-up game against Sri Lanka where I took 2/38. Then in the game against Bangladesh, I excelled with my best figures of the tournament of 4/30 but the most enjoyable performance for me was the one against Afghanistan. It was probably because I could understand what the batsmen were talking about as I also speak Pashto. Things got a little heated while I was bowling and one of the batsmen even complained to the umpire that I was being rude but that wasn’t the case as far as I was concerned. The win against Afghanistan was very pleasing and I picked up 3/58 and was happy that I played an important role in that win. The next game, the semi-final against India did not go to plan and was a huge disappointment for us, as any game against our arch-rival means a lot to the players. All in all, I ended up with 7 wickets in 3 World Cup games which was an excellent effort from me, given that I was recovering from an injury as well.

Experience of playing in front of big crowds in PSL 5

It is every young player’s dream to be part of a top-class tournament like PSL and mine came true when I was picked in the emerging player category for Peshawar Zalmi. It’s difficult to describe how enjoyable it was to play in front of our home crowds in the PSL. After this experience, I can safely say that playing in front of small crowds or no crowds, as was the case in some games, is no fun at all. On top of that, playing in front of a large crowd helps you get used to playing under pressure which I am sure will be useful for me in the future. I feel that I am a better bowler after playing in the PSL where I faced some pressure situations but ended up taking 3 wickets in 4 games in my debut season.

Advice from Hashim Amla and Darren Sammy during PSL 5

Darren Sammy, initially our captain and then coach gave me some very useful advice about how to bowl to technically correct batsmen – obviously when someone so experienced gives you advice, it means a lot and I will God Willing put that to good use in the future. Hashim Amla was another experienced player who spoke to me a lot about my bowling and told me that whilst my pace was good, my run-up needed some work to make me more effective.

The experience of playing alongside some world-class players was simply amazing and was an eye-opening experience. I quickly realized that the level of understanding of the game in seasoned players is totally different from us junior players and that was a great learning experience for me. For example, I just wanted to blow away a batsman with my bowling but from Hassan Ali and Wahab Riaz, I got the idea of how to plan the dismissal of the batsman by finding out his weak zone and then plugging away at it with accuracy. They told me that in the T20 format, it's normal to be hit for a few boundaries but the trick is not to get too bothered about it and to stick to your plan.

Unique bowling action and bowling at a quick pace

I suppose having played tape-ball cricket for such a long time in my younger years had an effect on my bowling action which allows me to extract good speeds from a run-up of about 5-6 steps. In fact, I prefer bowling from such a short run-up instead of the regular one which is longer and used by other bowlers. Even with such a run-up, I was clocked at 147 KpH at the NCA and then at 143 KpH recently in the PSL.

James Anderson and Shoaib Akhtar are my role models

When it comes to Test matches, the only bowler I follow and wish to copy is James Anderson but when we talk about bowling fast, there is no other bowler in my mind who I like and follow more than Shoaib Akhtar. Whenever I get time, I watch old footage of Shoaib Akhtar’s yorkers and bouncers as that is how I wish to bowl myself as well. At the moment, most of my wickets come via outswingers and I could have had more but a few catches in the slips were dropped off my bowling this year! But like my idol Shoaib Akhtar, I also like bowling short balls at batsmen.

Working with Wahab Riaz on yorkers at the PSL

During the PSL, I worked very hard on improving my yorkers as it’s a tough ball to bowl and get right. Wahab Bhai and I set up a few challenges to see who could bowl the best yorkers and somehow, I beat him a couple of times at that.

Areas of improvement and aspirations to represent Pakistan

My run-up will need a bit more work as I had some trouble with it due to my recent groin injury. The pain is no longer there, and I was fine in my recent fitness test. I am now looking forward to the restart of the cricket season and to continue working hard to one day represent Pakistan not in one, but in all formats.