A profile of the talented Karachi-born fast-bowler, Zeeshan Zameer, who recently replaced Akif Javed for Islamabad United in PSL 6 and has been named in the Pakistan Under-19s training camp ahead of the tour of Bangladesh. 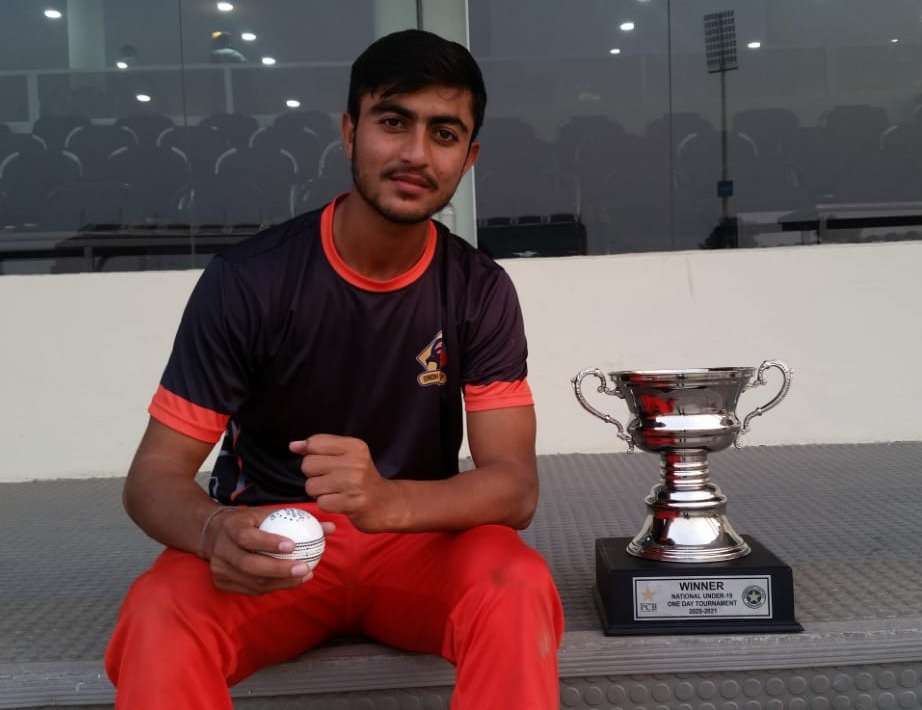 I was born in Karachi but come from a Pathan family. My father has worked as a delivery driver for a local beverage company for most of his life. We lived in a combined family system whereby 28 of us resided in one house in Nazimabad in Karachi. Given the fact that we were not well off and did not have the financial resources to spend on me to help me play cricket, everyone in our family was against my pursuing cricket as a career because they felt that I could never hope to earn well in that profession. But I persisted, never gave up and the Almighty helped me realize my dream of being a cricketer.

One of my cousins used to play tape-ball cricket in a field near where we used to live and I would watch him play and slowly built up my passion for the game. In 2017, a friend of mine seeing my skills with the tape-ball took me along to the Azam Khan Cricket Academy in Karachi where I got my first taste of hard-ball cricket. I was selected for Karachi Under-16s but was hit by a stress fracture of the back during the Under-16 Pentangular tournament preparation camp which badly dented my hopes for future development.


Injury and Regrets about giving up education

I left school in year 7 after I was selected for the regional Under-16 side in 2017 and then suffered a stress fracture of the back which confined me to my bed for almost 8 months. It is at that time that I felt I had made a bad decision to leave education as my future looked very bleak at that time, but the Almighty had other plans for me.

Whilst I had recovered from injury which took most of 2018, I was still very uneasy about resuming bowling, but Karachi Under-19 coach Mohammad Masroor helped and encouraged me at that time. He asked me to come to the Under-19 training camp in 2019 and I was selected to play for the Sindh Under-19s that year, but my performances were not that great. However, I had made up my mind that cricket was my life from then on and I would look to succeed in it, come what may. The proof of my new-found confidence came in 2020 when I took 19 wickets in 10 games at an average of 17 for Sindh Under-19s in the National Under-19 One Day Tournament. But unfortunately, I got injured again. This time around, it was an injury to quads and also a problem in my heel also developed. I was fortunate enough to be called to the National Cricket Academy for recovery as the PCB had taken note of my Under-19 performances and wanted to make sure that I was taken care of properly.


Missing out on First-class debut for Sindh due to injuries

I was called up by our Head Coach Basit Ali to play for Sindh in the Quaid-e-Azam Trophy in the 2020/21 season but once again, injuries meant that I was not able to bowl well in the nets and could not avail of this opportunity and had to respectfully decline. I was asked a few times to play for Sindh in First-class matches but I felt that I wasn’t fit and didn't want to risk further injury. I explained that to the Sindh team management who accepted my position.

Having recovered from my injuries, I was invited to play for Deccan Gladiators in the 2021 edition of the T10 League where I was lucky to have Mushtaq Ahmed as our bowling coach who instilled a lot of confidence in me. But the highlight of the tournament for me was my maiden T10 wicket which was that of Shoaib Malik. This was a moment in my career which I will never forget. When Shoaib had come into bat that day, I went up to him and told him that he was my favourite player and was doubly pleased when I took his wicket as well.


Selection for the Islamabad United squad for PSL 6

I had just about come back after playing in the T10 tournament when news came through that I had been selected as the replacement for the injured Akif Javed in the Islamabad United squad for their PSL 6 campaign. I was absolutely thrilled by this and immediately thought about the time when I would lay in my bed due to injury in 2017/2018 when I was wondering if I would ever play cricket again. I had truly come a long way from that point and for that I am indebted to the Almighty and will always thank him for helping me.

Once with the Islamabad squad, I was fortunate enough to have been guided by Rumman Raees and Hassan Ali who went out of their way to help me develop as a better bowler. In particular Rumman Raees taught me a lot about bowling, including the variations one needed to have to succeed in the T20 format. And even though I have yet to play a game in PSL, the feeling I got when I first walked onto the field in the National Stadium with the squad still thrills me to this day and is one that I will never forget.

It’s been a great experience to work with two amazing and experienced teachers like Mushtaq Ahmed and Rao Iftikhar Anjum. Both have been great in explaining to me any mistakes I have been making in my bowling and also giving me sound advice on how to fix those issues. I am now looking forward to the upcoming tour of Bangladesh and hope that I can perform to the best of my abilities if given the chance.


Pat Cummins as my role model

I have only followed one bowler all my life and that is Pat Cummins, and he is my role model, to the extent that I always wear number 30 on my shirt which is his number for the Australian side. Whenever I get a chance, I watch videos of Pat Cummins in action as I really want to emulate my role model as much as I can.

In terms of speed, I feel that I average between 140-145Kph and I am hoping to increase that even further. My wicket-taking deliveries are yorkers and bouncers and I feel that the bouncer is the one I excel in the most.


Aspirations to play for Pakistan

Like every other young player, it is my wish to play for Pakistan and I am hoping that I will continue to improve myself so that one day I can have the honour to represent my country.